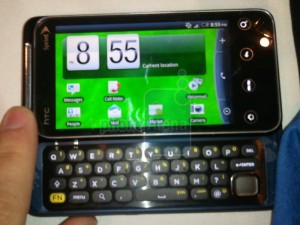 Hey Sprint, why don’t you do us all a favor and just announce the EVO Shift 4G?  It’s fast becoming one of the worst kept secrets in Android. Yet more photos of HTC’s next Sprint device have surfaced, showing a working version of the phone.  The 4-row QWERTY grows on us a little more each time we see it, even if it would be the 2,000th Android phone with a sliding keyboard.

As a recap, we’re expecting the HTC EVO Shift 4G to offer a 1GHz Snapdragon processor, 8-megapixel camera, a 3.7-inch Super LCD (800×480) screen, and (most likely) support for Sprint‘s 4G network.  The phone has been spotted in Best Buy’s internal system, indicating the retail stores are gearing up for a launch in the near future.  As much as we want them to, we don’t anticipate Sprint making any noise around the phone until at least CES at the earliest.