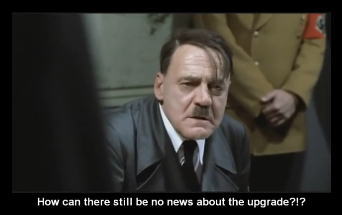 Apparently, it’s not just us common folk who are up in arms over the Motorola Cliq and its lack of a 2.1 update.  It appears Hitler is also one of the few unfortunate souls waiting on an announcement or update.  Things are getting so bad that he is considering switching to Windows Mobile or rooting.  As he puts it, he will have his Froyo and eat it too.  Video after the break.Source: Motorola Forums