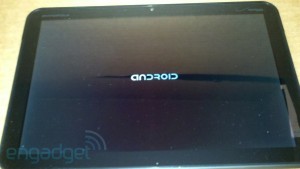 Ever since we saw the awesomeness that is the new Motorola tablet that is running Android: Honeycomb in Andy Rubin’s hands last week, we have been shouting the slogan of the fabled cereal from our childhood.  We have been craving more info and screen shots to sate our need for the latest Android devices like a fat man craves McDonald’s french fries. This morning, we got our wish!

Engadget has somehow gotten their hands on some more screens of the new Verizon Tablet, which not only gives us a better view of the unit, but also gives another confirmation of the specs that were rumored for the unit. A quote from the Engadget article:

this is Motorola’s 10-inch Honeycomb tablet, and it’s playing for Team Red just as foretold, though the tipster who obtained these images isn’t sure whether it will bear the name Stingray, Everest or even potentially “Trygon.” Spec-wise, we’re told our previous tipster was right on the money, and it’ll have a 1GHz Tegra 2 T20, a gyroscope and 32GB of storage underneath that 1280 x 800 multitouch screen, as well as 512MB of RAM and a slot for an up-to-32GB microSD card.

Check out the images over at Engadget, let us know what you think of this new hotness, and if it will tickle your fancy when it launches!