A new school year is just around the corner, so Honor just pulled out a new Back to School deal. Between now and September 2, 2018, customers can pick up an Honor View10 with $70 off. So instead of paying $499 for the phone, you’ll be able to get it for only $429.

The promotion is available with Honor’s official HiHonor website, but also at Amazon and Newegg.

The Honor View10 got the best smartphone of CES 2018 award

Can’t remember what the Honor View10 is all about? We’ll refresh your memory for you. The Honor View10 comes boasting a 6-inch display with 2160 x 1080 resolution with 18:9 aspect ratio. That means the device is tall and compact with slim bezels all around.

The highlight of this phone is the Huawei-made Kirin 970 processor, an AI-enhanced chip that can recognize different scenes and take better photos. The same chip has a big role to play when it comes to optimizing the phone and improving ease of use. 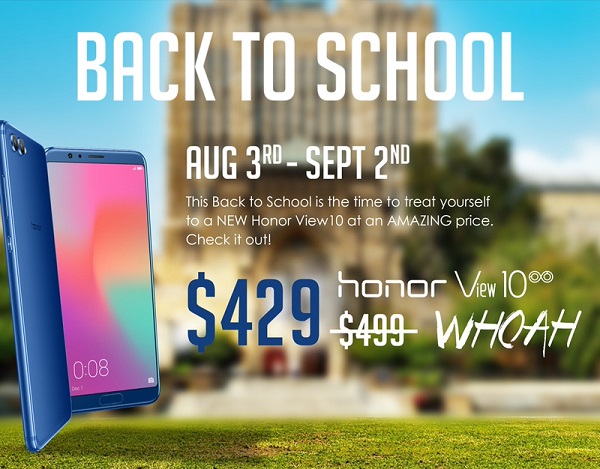 When it comes to photography there’s a 13-megapixel selfie shooter which aids with face recognition. On the back, the phone rocks a dual-camera system with a 16-megapixel color and 20-megapixel monochrome sensor pairing.

The phone also has a 3.5mm headphone jack and runs Android 8.0 Oreo out of the box. Unfortunately, there’s no waterproofing or wireless charging. Even so, the device is still quite intriguing at this (discounted) rice.

But before you jump on board with the offer keep in mind one thing. Like all other Honor phones released in the US so far, the View10, which is offered unlocked, is compatible only with GSM/LTE carriers.

This means that if you’re on AT&T or T-Mobile, the device will work just fine. But Verizon and Sprint subscribers will have to look somewhere else for an affordable flagship.