HP has recently announced their HP Photosmart eStation All-in-One printer which features a nifty 7 inch tablet as both the screen and the control panel.  The printer is a fully functional all in one and seems to be of the quality that we have come to expect from HP. 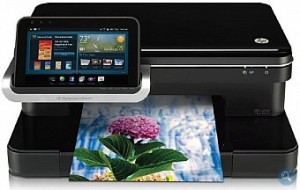 The tablet has a few nice features such as Android 2.1, a 7 inch screen with 800 X 480 resolution, a 1 GHz Freescale i.MX 51 processor, 512MB of RAM, and 4GB of NAND flash.  The tablet is also promised to be upgraded to Android 2.2, which is nice, however there are a few shortcomings such as no market, a quirky interface seeing as its optimized for printing, and its somewhat laggy.

The price point is set at $399 which seems more than reasonable.  Is anyone interested in eventually picking this up?