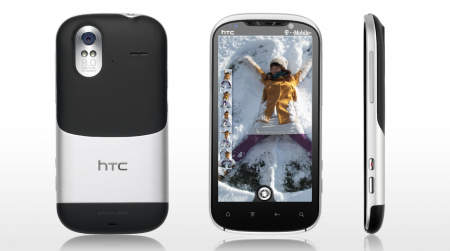 We were just prepping an article on the most recent leaked images for the HTC Amaze 4G when T-Mobile goes and announces the phone.  Ah well, such is life.  So…moving along, the HTC Ruby has become official as the Amaze 4G and the phone has been tapped with a price and date.  Look for T-Mobile’s new 4G hotness to debut on October 12 with a  $259.99 price tag, after $50 mail-in rebate and two-year service agreement.  Wanna get in on the action early?  Look for an exclusive online pre-sale two days earlier, October 10th.

Specifications for the Amaze 4G are exactly what we expected in the form of Android 2.3.4 Gingerbread, a Qualcomm Snapdragon S3 Processor at 1.5 GHz dual core CPUs, a 4.3-inch qHD Super LCD display, and 8-megapixel camera.  What’s more, the Amaze 4G also features support for NFC in addition to 1GB RAM, 16GB internal storage, a front-facing camera, HDMI output, and your other standard connectivity.  Making its debut at the same time as the Samsung Galaxy S II, this is one of T-Mobile‘s first and only handsets to support the 4G HSPA+ network at theoretical speeds of 42Mbps.

We can’t help but notice that T-Mobile has taken a page out of the other carrier’s 4G playbook, charging a premium for the faster data connectivity.  Are you cool with paying $50 or more extra for a device that might not be able to deliver the speeds you are looking for?