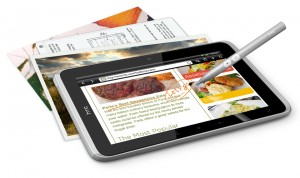 As expected, HTC officially announced their first Android tablet today in the 7-inch Flyer.  While the hardware is incredible with its 1.5GHz processor, 1GB RAM, and 5-megapixel camera, we fear it has a tough road ahead because of the software.  Unfortunately, as Android tablets really begin to take off this winter and spring, all eyes are on the Honeycomb tablets like the LG Optimus Pad and Motorola XOOM.  Rather than waiting to release the Flyer with the latest version of Android, HTC has opted to put the tablet out with an optimized version of Sense.

While it might sound like we’re already discounting the tablet as a contender, we’re not.  HTC has not simply pulled their normal Sense UI over to a larger screen.  They really have done quite a bit to make sure the experience is a great one.  For instance, there are new widgets to swipe through for pictures, contacts, media, and more.

HTC is also introducing a handful of new features with the Flyer such as HTC Scribe, HTC Watch (HD movies), and HTC Timemark.  Each brings something unique to the tablet experience and should play nice for end users. As Sense has been great for first time smart phone users, we anticipate the same for first time tablet buyers.

HTC’s Scribe and digital ink technology lets users draw directly on top of images, take notes, and more with the use of a stylus.  With full Evernote integration, one will be able to automatically sync all their notes, images, reminders, and tasks in the cloud and access them from anywhere.  The Timemark feature lets users record audio from a meeting or conversation, and sync it with written notes.  Returning to your notes, a quick tap of a word plays back the recorded audio.

Unfortunately we are not certain as to when the Flyer will be released nor what the price tag will be.  We’re expecting the tablet to land in European and Asian markets first, eventually coming stateside.

As there may be a few months before we see it here in the United States, there is plenty of time to add in Honeycomb.  And, judging by what we’ve heard on our end, HTC plans to bring Android 3.0 to the Flyer in short order.

Best Buy to Offer the HTC Flyer for Only $299