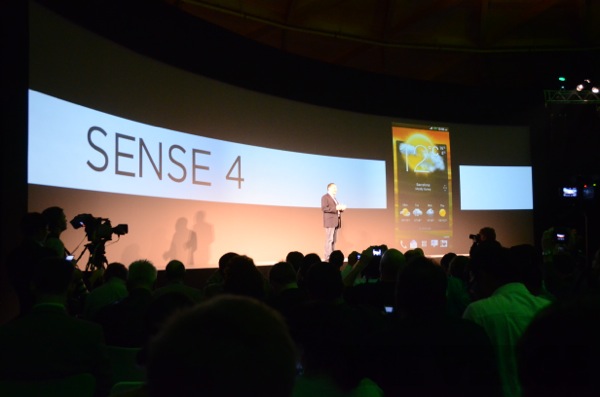 HTC just hit the stage at MWC, and they started off with a bang. Peter Chou, the Taiwanese company’s CEO, showcased some amazing new technology they’ve been working on, and I’ll try my best to sum it all up. First, Chou introduced Sense 4, the latest version of their UI, and broke it up into two parts: the camera and sound. We all use our smartphones to take pictures on the go, so why shouldn’t we have great cameras, right? Chou even went so far as to claim that the new camera technology gives the user the “power of a true digital camera on your phone.” With that, he introduced ImageSense, which is what they’re grouping all the new features into when describing the camera. Peter said that ImageSense improves all aspects of the camera: the lens, UI, sensor, and software. Let’s dive right in, shall we? 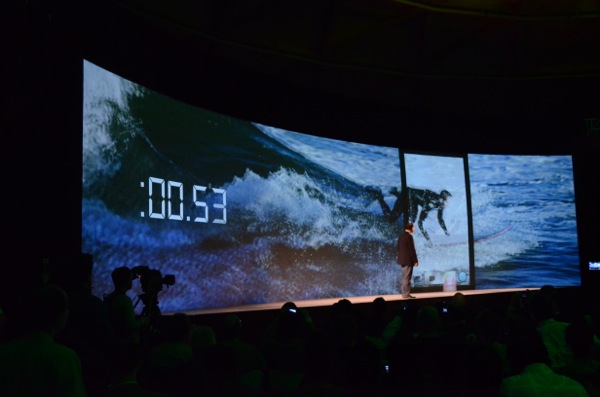 First, the video capture and photo capture buttons are right next to each other, making it seamless to switch from taking photos to shooting videos. HTC has managed to cut down the start time for the camera app to just 0.7 seconds, so you can capture those moments quickly, without any wait. As if that wasn’t enough, they also worked in a 0.2-second autofocus, and a “super fast burst mode.” A user has only to hold down the shutter button, and they’ll instantly get a burst shot, instead of shuffling through menus to find that setting. 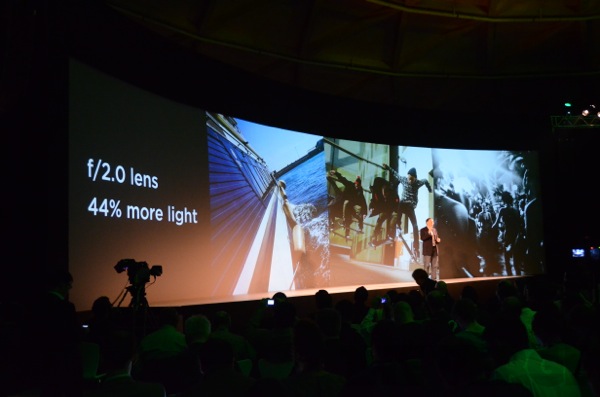 HTC has clearly put a lot of thought into camera speed and functionality. ImageSense cameras will use a best-in-class f/2.0 lens, which lets in 44% more light than f/2.4 lenses, giving users brighter and more clear pictures. ImageSense is also intelligent, as it recognizes how far away a subject is from the camera, and adjusts the strength of the flash for that specific photo. 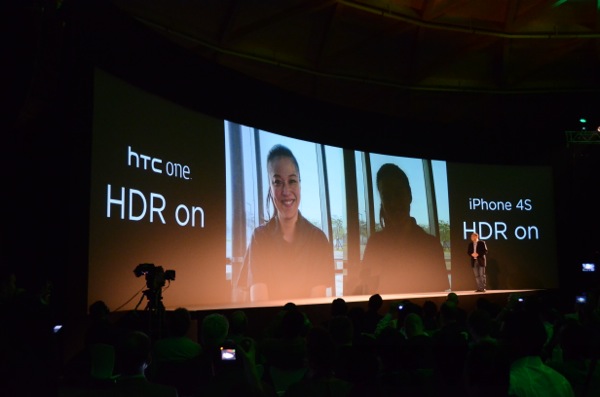 Furthermore, HTC has been working very closely with HDR technology, and have improved image quality greatly, compared to the iPhone 4S. 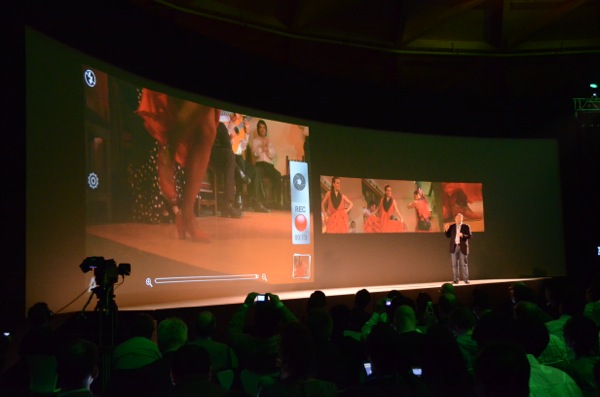 But wait, there’s more! HTC has also worked in the ability to shoot video and take still photos at the same time. Peter Chou referenced his daughter’s recital, where he had to hand the phone to his wife, to take still photos with another device. He had this to say about the new feature:

The Sense 4 camera interface … gives us a way to do both. So now while you’re shooting HD video all you have to do is tap the video button and you capture a high-resolution picture. 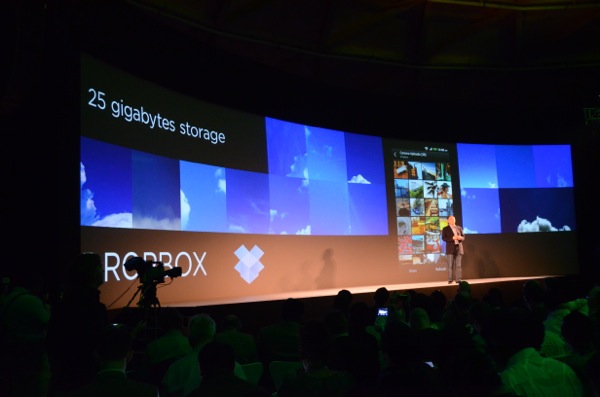 Moving right along, Chou announced that HTC is expanding its partnership with DropBox, which is music to our ears. HTC has integrated cloud storage into Sense 4, and anyone that buys a device from their HTC One line (more on that in a bit) will get 25GB of DropBox storage for two years. 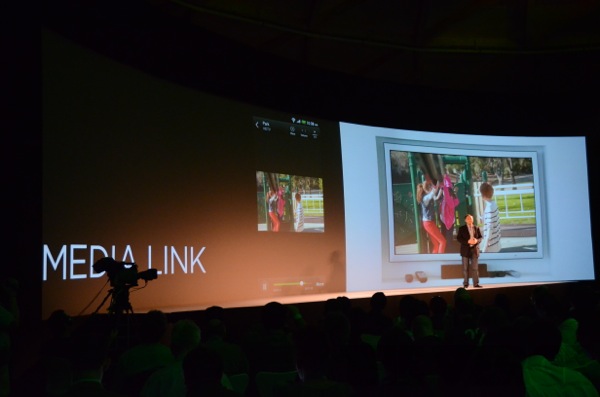 Chou also briefly touched on HTC MediaLink, which is essentially their way of sharing content with an HDTV. A simple three-finger swipe up on the screen sends a photo or video to the TV. He also mentioned a “mirror mode,” in which users can browse the web on their phone, while still sharing content with the TV. 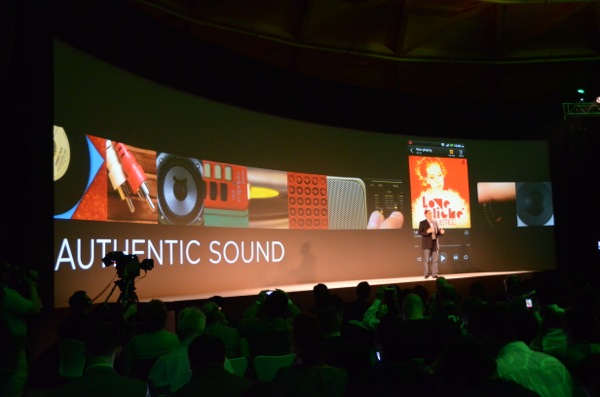 Peter quickly transitioned into audio content within Sense 4, mentioning the first time he heard the Beatles sing “Hey Jude.” To start off the music portion of the presentation, Chou had this to say:

With Sense 4, we integrated Beats into all music, any song, whether it is a local song or a stream on the internet. Whatever music service, it will get the Beats-integrated experience. 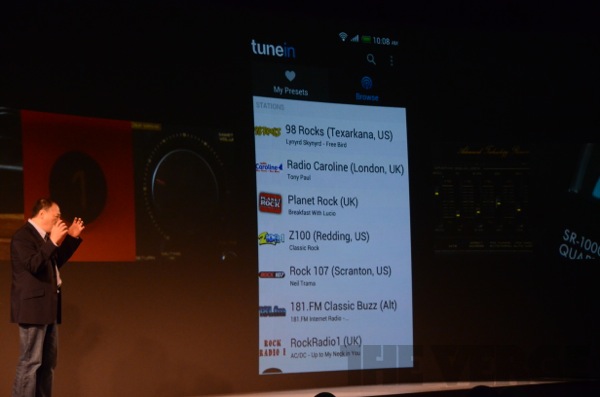 He went on to say that basically any audio on the device, from music to movies to games, will get integrated Beats sound. We found this one particularly intriguing. HTC updated their Sync service within Sense 4, so now a user only has to plug their HTC One device into their PC once. Sense 4 will have WiFi sync enabled, so the content will sync wirelessly every time after. iTunes playlists, and playlists from other services, will sync seamlessly with HTC Sync. Music apps can now be downloaded into HTC Hub, and they’ll integrate without any issues. Chou was quoted as saying, “This is the one place you enjoy all of your life.” 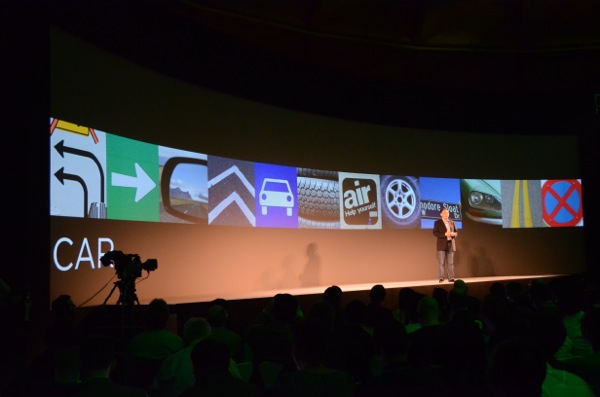 With that, he segued into music in the car. Peter gave some figures, and said that the most common thing people do when they’re driving is listen to the radio. He claimed that Sense 4 gives the user a completely new car experience. He introduced a small chip, that plugs into the 3.5mm headset jack in the car, and allows you to stream music from your HTC One device right to the radio, wirelessly.

Peter Chou wrapped it up from there, and moved on to the HTC One series of devices, which our own Asad Rafi is covering in a separate post. So with that being said, we’re definitely excited for the new features that HTC unveiled today, and we can’t wait to see them in person. What about you? Are you impressed with the work HTC has put into Sense 4? Be sure to leave a comment below!