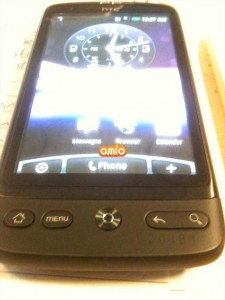 On paper, the HTC Bravo appears to be everything the Nexus One offers.  Although the two practically mimic each other in terms of specs, there are some subtle differences. For instance, there is an optical joystick in place of the trackball. Also, there are four physical buttons across the bottom as opposed to touch sensitive buttons found on the Nexus One. The other two changes are the inclusion of Sense UI and multi-touch support. Other than that, one might consider them the same phone.

Thanks to someone over at Omio, the first “in the wild” shot has arrived for the Bravo. For now, it appears that Bravo will be headed to T-Mobile UK. It’s not known whether or not this phone will arrive here in the US, but we get the feeling that many of our readers would welcome it. Couple the hardware of the Nexus One with the great interface that HTC has put together and you have a winning combination.

Stay tuned to AndroidGuys for more details on the HTC Bravo as we can gather them.