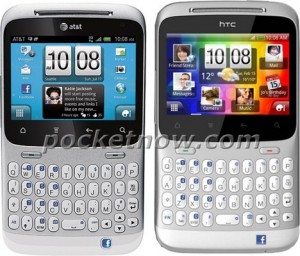 I for one am not a fan of the “Facebook Phone” concept, but it looks like HTC is set on it, as their ChaCha device just passed through the FCC. The AT&T version looks slightly different from the European version, but that’s expected. If you’re not familiar with the ChaCha, it was first announced along with it’s brother, the Salsa, back in February. Originally, it was set to launch with a 600MHz processor, but HTC brought that up to 800MHz, most likely to deal with the heavy customization on the device.

The ChaCha running Gingerbread with HTC’s Sense UI, and there is Facebook integration within the contacts app, the dialer, as well as several different Facebook widgets, all on a 2.6-inch display. As you can see, it’s rocking a physical QWERTY keyboard below the screen, giving it that landscape, Blackberry-esque form factor. There’s also a nice little 5MP camera on the back, as well as a VGA front-facing camera. No word on if the ChaCha will launch with Android 2.3.3 or 2.3.4, which would bring GTalk video chat to the device.

July 17th is the date that’s being thrown around as release day for the ChaCha, but nothing is set in stone just yet. More on this as it develops. So, is anyone excited for the first Facebook phone to hit the U.S.? Upset that it’s an AT&T exclusive? Leave a comment below, or on our Facebook Wall!