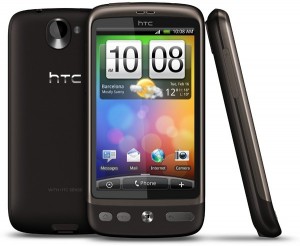 The official HTC announcements have come and gone, leaving us a few Android handsets in their wake.  First up is the new superphone, the Desire.  Long touted as the Bravo, it comes with a large 3.7 inch AMOLED WVGA display, an optical joystick, a 1GHz Snapdragon processor, Android 2.1, and the newest version of Sense UI. Did we mention that this stunning little number is Flash 10.1 ready?

Engadget Mobile is reporting that the Desire will be”broadly available” throughout Europe and Asia in early Q2’10 as well as in Australia via Telstra.  No news as to if/when this will hit the US, but we’re pretty sure some version of this will arrive stateside at some point.  On a positive note, HTC was quoted as saying, “a record number of mobile operators have confirmed to launch our new devices. HTC Desire has been accepted by almost every key carrier in every key country we work with.”

The new HTC Sense experience improves upon its predecessor by adding a new application/widget called HTC Friend Stream.  It blends all of your social networking and communication together into one steady flow of updates.  Users can also organize their contacts into whatever groups  they want to create – friends, family, colleagues, arch nemeses, etc.  HTC also added a newsreader app/widget  to Sense as well.  The multi-touch pinch zooming on the home screen that we saw demonstrated last week is also part of the new Sense experience and is called Leap.
Note: Select outbound links may include affiliate tracking codes and AndroidGuys may receive compensation for purchases. Read our policy. As an Amazon Associate we earn from qualifying purchases.