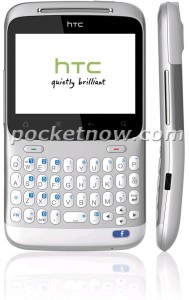 Take a look at the the following two devices.  Both are designed by HTC and look as if they would be your typical Android smart phone, save for one tiny little button at the bottom of each.  See that Facebook icon?  Apparently these are press-ready renderings of the oft-rumored–oft-debunked Facebook phones.  The guys at Pocketnow have scored another doozy tonight in what they are claiming to be the real devices.  No, for real this time.

Whereas one model is a touch-only design, the other bears a portrait QWERTY below a smaller screen.  Looking very much like the Salsa that was leaked in late 2009, this form factor has yet to really take off.  Maybe it’s going to take a phone of Zuckerberg scale to get it off and running.

According to recent whispers, these Facebook phones will feature an always-on GPS signal and have the ability to directly upload images to Facebook.  In other words, pretty much your standard Android phone.  We’re not sure exactly how Facebook-y this modified UI will be but we get the feeling that many of you would rather have a stock Android experience with a better Facebook app.

It’s being said that the touch-only model will be known as the HTC Icon while the other model is the Snap 2.  Some of you may recall the Snap from your Windows Mobile days.