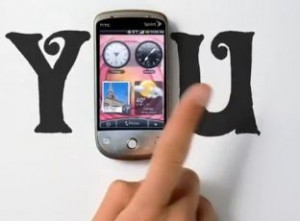 For years, HTC has been the biggest handset maker that nobody had ever heard of.Â  Content to stand back in the shadows and defer the spotlight, the Taiwanese manufacturer has remained relatively unknown.Â  If someone were to ask you who made your Windows Mobile smart phone, chances were good that you eitherÂ  said ‘T-Mobile’ or ‘I don’t know’.Â  That’s because the devices were marketed as carrier branded handset (think T-Mobile Dash, T-Mobile Wing). Until now, they’ve been one of those companies who didn’t get the credit they deserve.Â  That’s all changing.

HTC has started a major push for brand awareness here in the United States and deservedly so.Â  As of today, they are responsible for nearly every Android handset released in the US, with more to come.Â  Some of the best cutting-edge phones in the world are their products and the public should know that.Â  Enter the “Quietly Brilliantâ€ campaign.

Weâ€™ve come to have a very emotional relationship with our phones. Many of our key experiences in any given day come through this one device and yet most of the advertising in the category is still about utility.Â  HTCâ€™s whole design philosophy is very personal. They make phones where your experience is completely unique, so we think there is a connection between how people feel about their phones and how HTC makes them. – Eric Hirshberg, co-CEO and chief creative officer, Deutsch LA.

We’ve embedded the first two advertisements from the campaign. As Androinica points out, Android is bound to grab some extra attention as a result of this push;The handset featured in the commercial is a Hero from Sprint. Further, HTC is heavily vested in Android and will continue to develop a majority of their handsets using the platform.