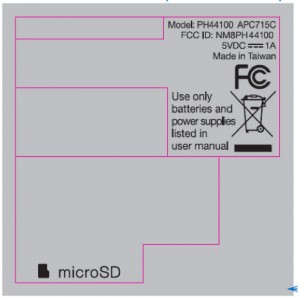 It has been a few weeks since we last talked about the HTC Kingdom, but lo and behold, it’s back again.  This time, the phone has been spied in FCC documents, where we learn officially that it features a 4.3-inch qHD display as well as both CDMA and WiMAX support.  Other than that, we’re still unclear what exactly lies ahead for the PH44100 Kingdom.

Back in May, the Pocketnow team posted what they believe to be the full details. According to them, the Kingdom has a Qualcomm MSM7630 chipset, Adreno 205 GPU, 768MB RAM, a (conflicting) 4.0-inch qHD display, 1.3-megapixel front facing camera, and 5-megapixel camera on the back. What’s more, they refer to benchmarks that indicate a Scorpion single-core CPU humming at 1.2GHz. And finally, they suggest the Kingdom will ship with Android Gingerbread 2.3.3.

One particularly interesting note is that the Qualcomm MSM7630 chipset provides CDMA world support. Checking through the comments over at Engadget, one reader tosses out the idea that this could be the makings of an Evo Global.  We like the sound of that, how about you?  Whatever the case, the FCC filings tell us we’ll be finding out soon enough.

And like that, Sprint‘s Android lineup just keeps getting better.