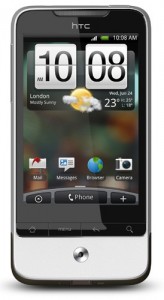 Will HTC’s new Legend handset end up in the Google Android store with the Nexus One?  Sindre Lia, of infoSync thinks it’s a possibility and we’re inclined to agree. One of the things mentioned when the Google store was unveiled is that other handsets will be sold through the channel as long as they brought something ‘unique’ to the portal.  Looking at the Legend, we see plenty of things that differentiate it from the Nexus One, making it a potential store candidate.

When the HTC Legend was announced, HTC said that there were no immediate plans to offer it here in the United States.  That could mean two things – a US version could come later (a la Sprint‘s Hero) or it could be made available through the store without any carrier attached.

As of now, we can only guess as to what phones will arrive in the Google store.  We’re aware of Motorola’s plans to offer something through the channel, but beyond that, your guess is as good as ours.  Or as good as Sindre Lia’s.