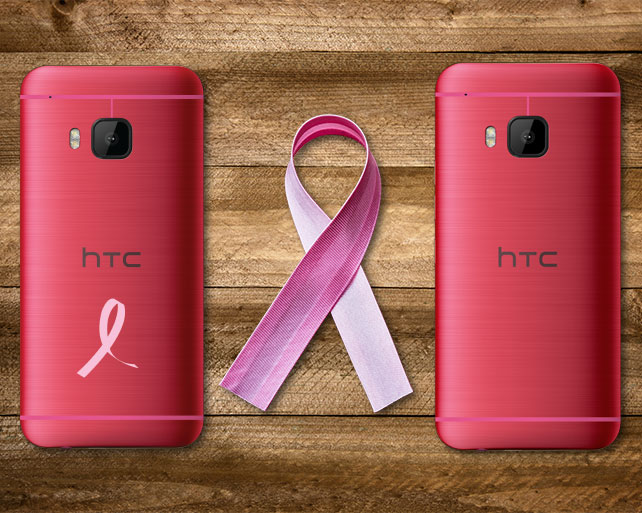 It’s October, and that means two things are about, Halloween and Breast Cancer Awareness month. Earlier today, HTC announced that they will be participating in the fight against Breast Cancer.

HTC has decided to make two different variants of their current flagship, the HTC One M9. Both variants will be pink, but there will be one with no logo or anything on the back, while the other will have the Breast Cancer Ribbon.

In conjunction with releasing these variants of the One M9, HTC will also be donating $25,000 to the Breast Cancer Research Foundation. That is a huge contribution to the Foundation, and HTC has pledged to donate that amount, regardless of the amount of sales from the special edition One M9.

Speaking of sales, you’ll be able grab one of these special edition One M9’s for $649, directly from HTC, with free shipping. In addition, with every purchase, you will receive $100 in Google Play Store credit, and a FREE pink Dot View Ice case. So, while you’ll be spending $649 on the device, you’ll also be getting $150 worth of freebies with your purchase.

As one more act of kindness and support, HTC is also taking 30% off their pink cases for the HTC One M9. This is another gesture to show support for the Breast Cancer Research Foundation, and allows for those who already have the One M9 to show their support for Breast Cancer Awareness Month.

The offer will be available from now until October 31st at 11:59 PT, so you have a few weeks to grab one of these before the deal is up. Users on Sprint and Verizon will not be able to take advantage of this deal, due to the fact that these special edition One M9’s only have support for GSM services.