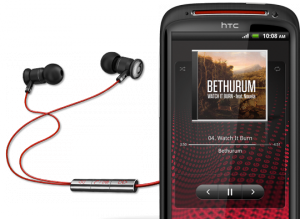 It didn’t take very long to go from leak to official, but HTC has formally announced the refreshed version of their Sensation handset.  Called the Sensation XE with Beats Audio, it’s exactly the type of smart phone that we expected it would be.  Details include a dual-core 1.5GHz processor 768MB RAM,a 4.3-inch qHD display, an 8-megapixel camera (rear), and a VGA front-facing camera. The Sensation XE runs Android 2.3.4 Gingerbread with HTC Sense 3.0 over the top, and comes boxed with either 8GB or 16GB microSD cards.

Focusing more specifically on the Beats Audio, consumers will get a set of exclusive Beats by Dr. Dre in-ear headphones with a remote control in the box. The aural experience runs deeper, however, with software-based goodies hiding under the hood. Plug in the headphones and watch as your phone automatically switches to a custom Beats sound profile which delivers, crisper vocals, deeper bass, and a whole new level of clarity and range.

While we don’t have any indication that the U.S. will see the HTC Sensation XE, it will be available in Europe, Asia, the Middle East, and Africa later this month. Pricing was not immediately announced however rumors hint at roughly $850 US or whatever the equivalent local currency is at the time.