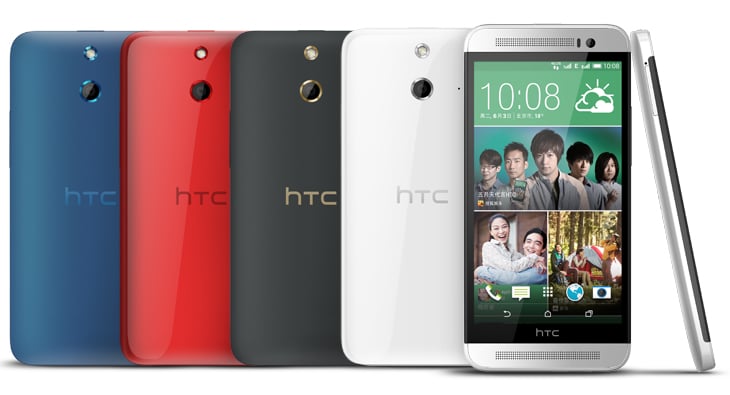 Following the launch of their flagship M8 smartphone, and some recent rumors, HTC has announced their new HTC One (E8) smartphone.

This follows a now-popular trend of ‘lower-end’ phones being built with a hefty set of features and/or specs and being both marketed and priced very aggressively to reach the masses.

This device is quite similar to the M8, with a few design revisions to keep it more accessible (read: affordable) than its flagship cousin. The body of the phone is polycarbonate in lieu of aluminum (but still is uni-body). The E8 loses the HTC “Duo Camera” (which included the “UltraPixel” camera and a 2nd lens, used for an increase in autofocus speed and accuracy), but does retain a more traditional 13MP rear and 5MP front cameras.  Also still included is the HTC “BoomSound” speaker arrangement, MicroSD card slot, Android KitKat 4.4, Sense 6, LTE, 5″ screen, and “MotionLaunch” (gesture-based controls without having to wake up the device).

Also a now-popular move, HTC is offering the E8 in a variety of stylish colors, including Polar White, Electric Crimson, Maldives Blue, and Misty Gray.

The questions that remain are availability and price.  It’s known that the E8 will initially launch in China, but we are unaware of HTC’s plans to extend the E8’s availability to further regions.  Regarding price, that is still up in the air, but if this device is to follow the aforementioned trends, expect it to be much more appealing to the more every-man customer.

As more details and information emerge, we will keep you in the loop!

Compare all Smartphones | FindTheBest
Note: Select outbound links may include affiliate tracking codes and AndroidGuys may receive compensation for purchases. Read our policy. As an Amazon Associate we earn from qualifying purchases.