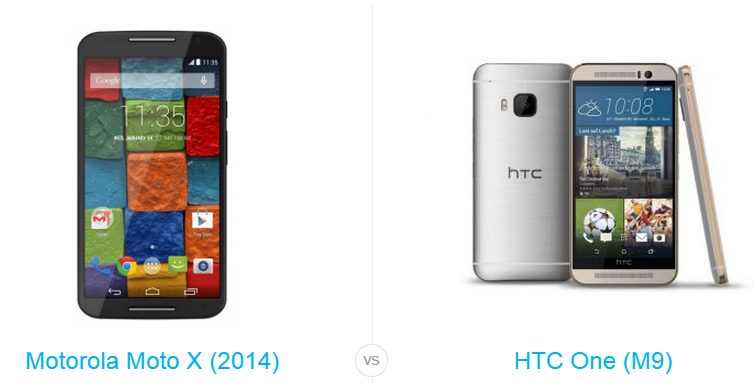 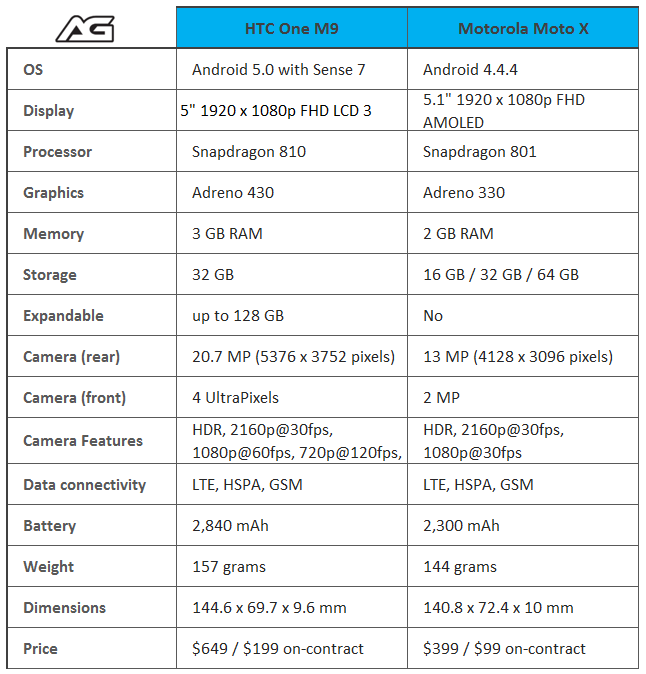 Motorola’s latest Moto X flagship has been on the market for a few months now, and while the price has dropped, it is still an amazing phone that uses metal materials found on the One M9, and is just as speedy despite it’s older Snapdragon 801 chip, thanks to heavy software optimization on Motorola’s part.

The battle of the screens on these two phones is a matter of what the customer prefers. The Moto X offers a colorful FHD AMOLED display with the deepest blacks possible and virbant, slightly saturated colors. HTC’s LCD 3 display does a fantastic job offering true-to-life colors and very sharp details. The Moto X offers a slightly bigger screen for those who want more space, but the One M9 will be easier to handle with one hand.

The One M9 will be capable of 64-bit processing thanks to the brand new octa-core Snapdragon 810 chip that includes one quad-core chip at 1.5 GHz and another quad-core chip at 2 GHz. The Moto X uses the Snapdragon 801 chip which is a quad-core 2.5 GHz Krait 400 CPU. The Moto X offers one of the most fluid and smooth Android experiences on the market thanks to careful optimizations and the near stock Android software, and while we have not used the One M9 yet, we are confident it will be even faster than the already speedy One M8.

In the camera department, it’s safe to say that the One M9 will beat the Moto X in terms of color reproduction and image sharpeness, with their new 20.7 megapixel camera, compared to the Moto X’s lackluster camera offered last year.

The Moto X’s offered a very average battery life, as Motorola focused more on the quick-charge capabilities than the actual battery duration. The One M9 will include a bigger battery than their last year M8 model, at 2,840 mAh, and while battery tests are not available yet for the new flagship, they are bound to be great with the efficiency of the Snapdragon 810 chip and relatively small 5 inch 1080p screen.

Right now, Motorola offers their flagship phone unlocked for only $400, which will save you a lot compared to HTC’s newest phone, expected to be $649 off-contract.

An honorable mention goes to the fact that both of these phones will be water resistant, meaning they can be used outdoors in rain. However submersing them in water for long periods of time is not recommended.

So, still a fan of the Moto X, or will you be hopping on an M9 as soon as it’s released?