We have heard plenty lately about the Samsung’s upcoming new successor, but we must not also forget about HTC’s upcoming flagship – the successor to the famous One. Rumored under the code name of HTC ‘M8’ or the HTC One Two it’s a phone definitely worth watching.

Thus far, we’ve learned that it will hit all the major US networks, also a 1080p display with a Snapdragon 800 and we also saw some images of its body, probably. Well, now it’s time to hear some new rumors about the upcoming “HTC One Two” software. 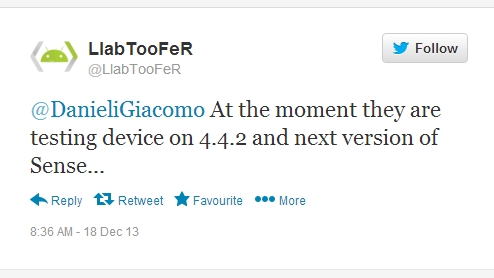 Insider @LlabTooFeR is reporting that the Taiwanese giant is already testing the latest Android KitKat and upcoming Sense 6 on the new device. The tipster reported rumors in past as well, which turned out to be true after a period of time.

Keep in mind that these are not necessarily news details; however they are confirmations of previous details. Also, it’s worth noting that HTC might be able to launch as a much more current device than the HTC One. As a quick reminder, the HTC One debuted with Android 4.1.2 when Android 4.2 had already been in the market for a few months.

Do you think the HTC One Two will be good enough to go head to head with Samsung Galaxy S5? Don’t forget to tell us what you think in the comment box below.