Here’s yet another potent Android phone to put on your radar, the HTC Runnymede. According to information gathered by Pocketnow, the device first surfaced a few weeks back when it was listed in EXIF data on an image sharing website. On the surface, the specs sound like an upper echelon smart phone but not quite the top of the line. Digging a little deeper we learn there are some added details that should enhance the overall value of the Runnymede.

UPDATE: Skip on to the rest of the article to see an image of the Runnymede as well as some additional specs and pricing!  Looks like there will be 16GB and 32GB versions of this phone.

Some of you might scoff at the Runnymede’s single-core processor and 800×480 resolution but check out these next few details.

The camera, for instance, is said to feature a backlit sensor plus 28mm wide-angle lens and focal ratio of f/2.2 (compared to the iPhone 4’s smaller f/2.8); in video mode, it can supposedly capture footage at 60 frames-per-second, more than twice that of the average handset. Obviously sound quality will also play a big role here, with Runnymede featuring SRS Surround, dual microphones, and even recognizing when it’s plugged into the Beats headphones.

Pocketnow tells us that the Runnymede should be ready to roll in time for the holidays although the wireless provider is still up in the air.

UPDATE: We’ve since received the document you see below which also includes pricing and additional specifications. 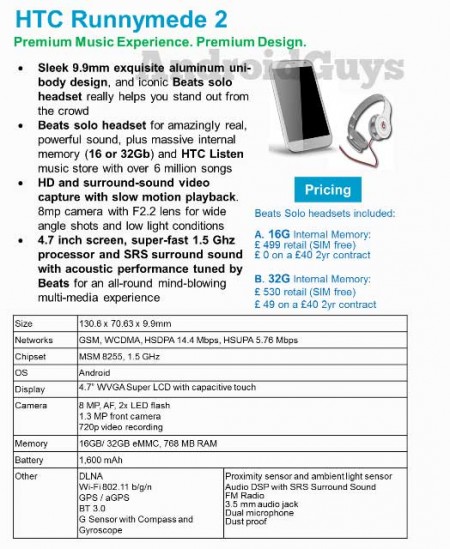