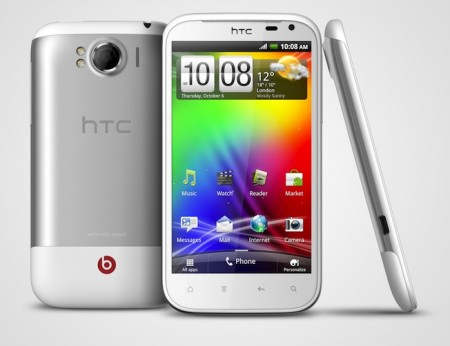 HTC is on a roll these days as they recently announced the Sensation XE and now they are back with another addition to their Sensation line. Today, they officially announced the HTC Sensation XL, previously known as HTC Runnymede, which was leaked a lot of times before and even said to be called the HTC Bass officially — guess they were wrong on that one. The phone comes with a huge 4.7 Inch Super LCD touchscreen display but HTC didn’t say anything about the resolution which we’ve heard is 800×480. It comes with a 1.5 GHz Single-Core Qualcomm processor, 16GB of internal storage, Android 2.3 with Sense UI, 8 MP camera and a 1.3 MP front facing camera. The single core processor might be a little disappointing for most people as dual-core has become the new standard in mobile and quad core on the way. Also, the resolution is WVGA instead of qHD or HD so let’s hope HTC knows what they are doing. The device is only 9.9 mm thick and the unibody chassis makes it look even sexier.

As you can see, the device comes with Beats Audio integration which also includes exclusive Beats Audio Solo headphones. Price and release date will be announced soon, and word on the street is that there is no possibility of this device hitting N. America so plan on an Asian and UK market launch. So, anyone planning to grab this monster when it comes out? Share your thoughts with us about the Sensation XL after the break.