When Android 5.0 Lollipop was released, HTC promised to update its flagship devices within 90 days, which put it at around February 2015.

However, according to a recent report, HTC could be rolling out their Lollipop update to the One M8 and M7 in Europe as early as January 3rd, 2015.

Whilst everyone will probably not receive the update exactly on this date, the rollout will begin on the 3rd Jan according to HTC at a recent press event in London. 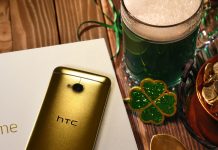 Ever wanted a golden smartphone? HTC lets you win a 24k gold plated One M7