HTC has taken to the Chinese version of Twitter to start teasing their newest flagship. Dubbed the MengYao, the newest phone from the struggling Taiwanese tech giant hopes to find some success after the failure of the HTC One M9. 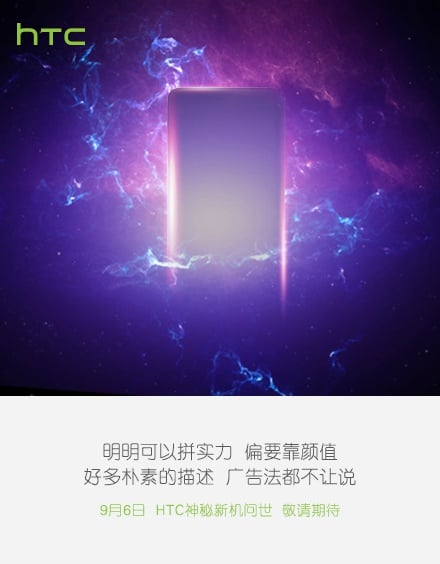 There have been leaks recently of an “HTC Aero” pointing to a second flagship line much like Samsung and LG have been putting out lately with releases early in Spring and in Fall. We don’t know much right now except that HTC is really pumping up the “handsome” angle with this device. The code name for the phone, MengYao literally translates to Handsome Gentleman. The ad on Weibo simply states “September 6, MengYao, Stay Tuned.”

Previously leaks have pointed to a device named the HTC Aero releasing late this year packing a MediaTek Helio X20 SoC, 4 GB of Ram and a an all metal build. We hope that HTC has learned the sins of the HTC One line and given this a unique but upgradeable design that can evolve over time unlike the One which has become stagnate. The failure of the One, among other things, have caused a massive collapse in the value of the company which at one point was trading less than cash on hand, deeming the company basically worthless.

If released in the US, it will become one of the first major flagships to use a MediaTek chip over rivals Qualcomm’s Snapdragon and Samsung’s Exynos chips.