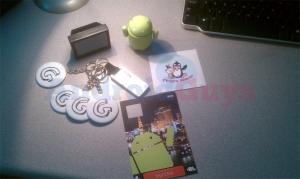 I am not sure what to make of the following items.  Last week, I received a package on Wednesday that looked and felt an awful lot like it would contain a review unit cell phone. The name on the box indicated it was from HTC’s PR firm, Waggener Edstrom.   Excited that it might be a new HTC phone (EVO Shift 4G, Thunderbolt), I tore into the box.  Instead of an Android smart phone awaiting me inside, I found pieces to what felt like a viral puzzle game.

If I didn’t know who Waggener Edstrom was, I would have been even more confused as “HTC” is nowhere to be found.  I realized rather quickly that the ‘G’ letters resembled the font found in some of HTC’s marketing and figured the empty square would be where one sees the caller on the other end.   The foam television is likely for a TV output like HDMI and the sticker implies Android 2.2 on something. The compass indicates we might seeing our first Android phone with HTC’s new “Location” capability.

My guy tells me that this all part of HTC’s plans to unveil the new 4G-ready Thunderbolt on January 6th.  So here’s where I ask you guys.  Have you seen these items elsewhere?  Did you received them yourself?  Any other clues or advice would be greatly appreciated!