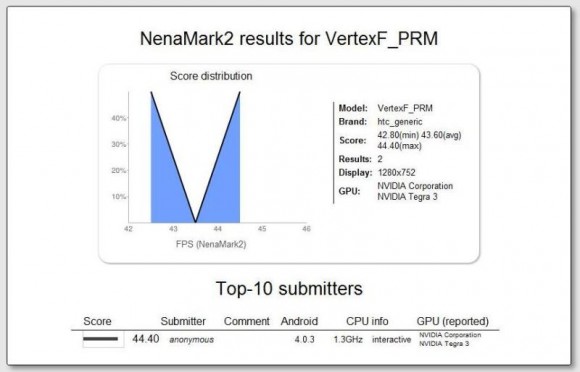 We recently reported that HTC is planning to come out with a new Android phone which will feature a 1.7 GHz Quad-Core processor, and also there is word on the street that HTC will make a comeback in the tablet market by launching a tablet with a “unique” factor. Now a tablet known as HTC Vertex, showed up at two separate benchmark tests site and with some hardcore stuff under the hood, this is probably the “unique” tablet we heard about before.

On the time of the benchmark, the tablet was spotted with a Nvidia Tegra 3 processor and it’s running Android 4.0 Ice Cream Sandwich. According to latest reports and rumors, it will feature a 10.1 inch display with resolution of 1280×786, and it will be only 9mm thick. Most probably, there will be a 2MP camera on the back, and a 1.3MP on front for video chatting. And of course it will support Beats Audio.

No words on the launch of this tablet, but hopefully HTC will be launching it later this year. Are you looking forward to HTC’s upcoming tablet? Tell us what do you think about this in the comment box below.