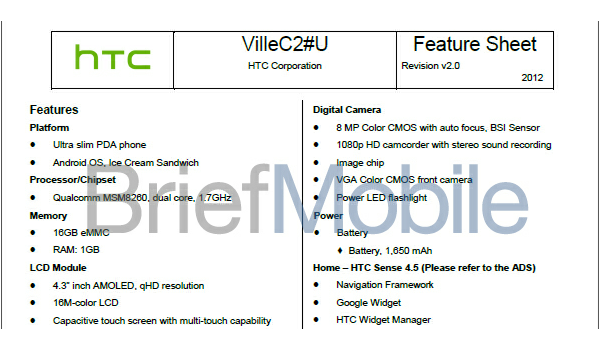 A new HTC smartphone has leaked online which looks to closely resemble the HTC One S announced earlier this year.  Called (for now) the HTC Ville C, the specs are pretty much identical to the 4.3-inch handset save for some minor adjustments.

For starters, the Ville C is said to feature a Qualcomm MSM8260 S3 processor whereas the One S comes with a MSM8260A S4 chipset.  And while the image accompanying this post suggests a 1.7GHz clock speed, the source advises it will be set at 1.2GHz when it arrives. The other notable difference between the Ville C and the One S is that this newly leaked model is listed as running HTC Sense 4.5 instead of the 4.0 stuff found across the 2012 lineup.

We’re a little concerned that these may be the only major differences between the two models and that this could lead to consumer confusion.  The last thing we want to see from HTC is a string of models that don’t have much disparity between them.