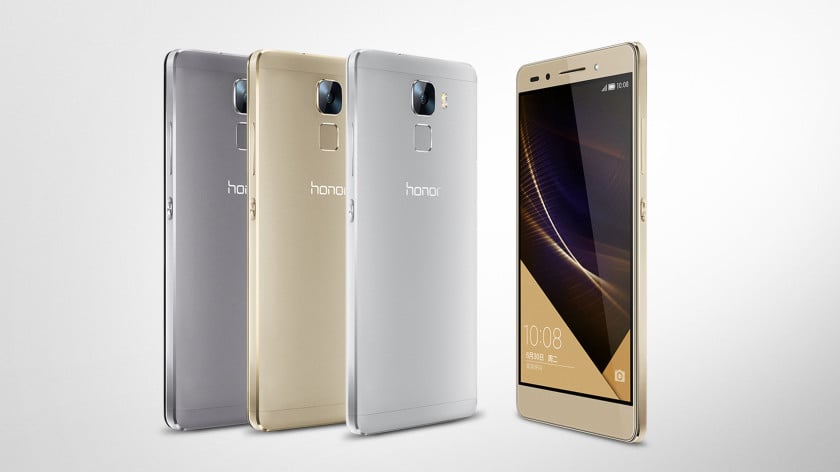 The much anticipated Honor 7 was just announced today during Huawei’s official press event. The Honor 7 will will come in three variations, each sporting an all metal body. 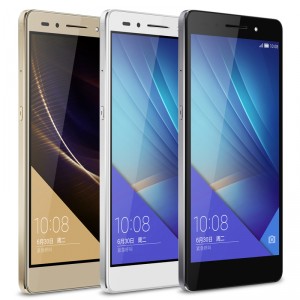 In the camera department, the Honor 7 shows off a 20 mega-pixel rear camera with “Phase Detection Auto Focus” that will supposedly give you a 0.1 second focus time. This shooter also has a F2.0 aperture and 6  lens made out of sapphire glass.

Over on the front is a more modest 8 MP camera that has a fixed focus and F2.4 aperture.

Following today’s standards, the Honor 7 will ship with 3 GB of RAM. As stated before, the base model will contain 16 GB of internal storage for about $322 with the option to grab a 64 GB model for around $400.

Don’t worry if you can’t afford a 64 GB model though. Huawei has included a SD card slot with support for up to 128 GB microSD cards.

What good is a phone if it is dead? Huawei asks the same question and answers it with a 3100 mAh battery powering the Honor 7.

This battery supposedly will reach a full charge in a mere 1 hour and 25 minutes. Don’t have time for that you say? Well don’t worry, you can get up the a 50% charge in just 30 minutes.

If you don’t have 30 minutes to charge your phone, then I would say you have bigger problems then trying to find a way to keep your phone alive.

Although not specifically mentioned by our source, it would appear that the battery is non-removable as a consequence of the beautiful all metal body.

Bands are, of course, dependent on your region.

This sensor will allow for one touch unlock. Huawei has also baked in various apps for banking and additionalpayment methods that will utilize the fingerprint sensor for security purposes.

Honor 7 comes with Fingerprint Cards AB (FPC)’s FPC1025 fingerprint sensor. A step up from the FPC1020 that can be found in Huawei’s Ascend Mate 7.

In a statement from FPC’s CEO, we learn that the FPC1025 is capable of 360 degree finger rotation.

[blockquote author=”Jörgen Lantto, CEO of FPC“]Huawei is a leading global smartphone manufacturer and we are proud that Huawei selected FPC1025 for Honor 7, following up on the great success of Huawei Ascend Mate 7 with FPC1020 embedded that was launched in 2014. FPC1025 supports 360 degree finger rotation capability, fast response time and industry leading 3D image quality.[/blockquote]

For a base price of $322, the Huawei’s latest offering comes with near top of the line specs and a killer camera for half of what current flagships go for.

Hopefully the device will meet our expectations and deliver top grade performance for one of the cheapest prices out there.

The device will be start selling in China on July 7th while pre-orders are available now. A launch globally, including the US, is expected in the coming months.

Let us know in the comments down below what you think of Huawei’s newest device. Will you be getting it?