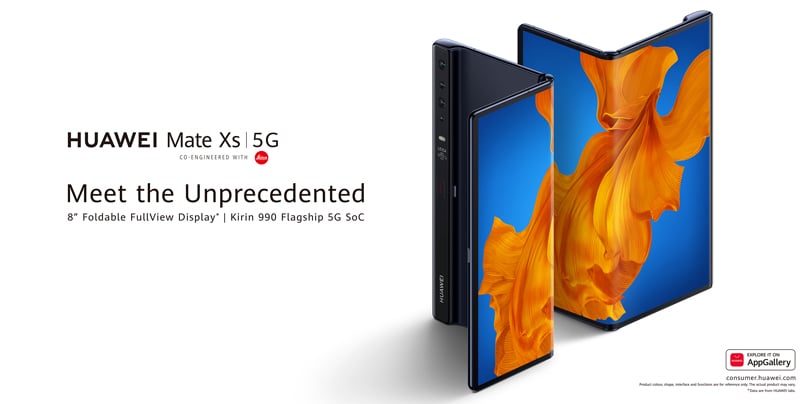 Huawei this week unwrapped the successor to its 2019 foldable phone, the Mate X, with a more powerful and stronger Mate Xs.

Things look largely the same as the predecessor, at least on the surface. But, internally, it features a faster processor (Kirin 990) and a redesigned hinge. The new processor is not only quicker but it allows for an integrated 5G modem as opposed to a separate component.

As for that folding mechanism, it employs a four layer construction process which amounts to two layers of polyamide film, a flexible OLED display, and a soft polymer layer for cushion. The Mate Xs is still an all-plastic phone; Samsung employs glass for its Galaxy Z Flip.

The foldable phone natively supports Multi-Window which allows for two apps to be displayed side by side and interact with each other. Text, images and documents can be transferred as easily as dragging and dropping the content from one app to the other.

In terms of software, the Huawei Mate XsS runs Android but does not feature the Play Store or any of Google’s suite of apps. A custom software touch lets users open up three apps at once, one on each side of the display and a third floating window. It’s also possible to run two instances of an app at the same time.

The screen details and overall design are unchanged and shake out to 8-inches which folds along the outside edge. The main display measures 6.6-inches when folded.

While the original Huawei Mate X was only offered in China, Huawei advises the Mate Xs will be sold in in “global markets.” The €2,499 (~$2,700 USD) model comes with 8GB RAM and 512GB internal storage.