Today’s tablet world lacks a lot of parity. On one hand you have the premium devices like the iPad lineup, or the Samsung Galaxy Tab line. While these devices are extremely durable, high-performing, and very pretty, their respective prices can make them prohibitive for a lot of potential buyers.
But the problem is that the alternatives to these high-end devices (and I’m talking specifically of the Android space here) drop off rather quickly, into a sea of B-brand (and sometimes “what brand?”) tablets that can go from merely adequate to god-awful to use. To find a truly good but not super-high-end Android tablet has become somewhat of a unicorn hunt.

Enter the Huawei MediaPad M3 8.0 tablet. For about $300 (buy here from Amazon), you get a pretty nice set of specifications:

While the Huawei makes no claims at being an iPad slayer, it also in no uncertain terms has to, either. I believe there’s a lot of folks in the tablet market who are looking for a device that isn’t bottom-dollar cheap (and works like it), nor is very nice but happens to cost as much as a very decent laptop. Let’s take a tour of the M3 and see how it stands up, shall we? 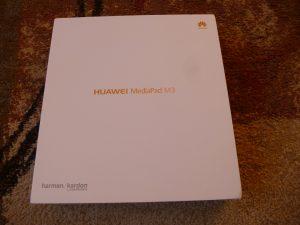 The MediaPad M3 arrives in a stylish white, square box. Opening you find the tablet itself front and center, with access panels for the charging plug & cord, and the SD slot access tool & lithe manual. Hidden within the cover is a complimentary screen protector.
In all it’s a very modern, clean presentation, giving you just what you need without any extraneous distractions. Sadly no earbuds come with the 32 GB model; though the 64 GB version arrives with a very nice set of AKG earbuds in tow.

The tablet itself is a great combination of density and thinness; it has a great iPad-like 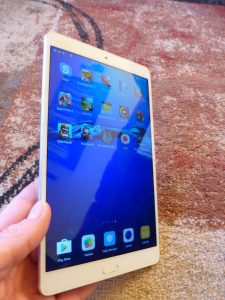 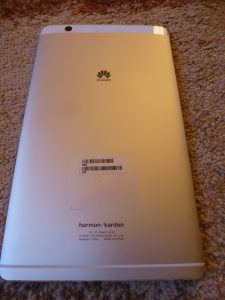 heft to it without feeling bulky (Sorry, I know this is an Android-based website, but Apple has always gotten it right with tablet design in my book.).
I tend to have bigger hands than most, so consider the source when I say that the Huawei is darn near a one-hand device, just beyond phablet. Now that I write that and look back at the tablet, it has a definite smartphone look to it.

The shell is uni-body CNC-machined aluminum, and is quite nice to look at as well as feel in your hands. the back is a very, very light etch; but nothing that provides any real added grip. The front side bezels are tiny; so small that I’m not sure it remains a feature. What I mean is that holding the tablet in portrait mode, it becomes all-too-easy to touch the screen, creating a likely not-wanted action on the device.
While the left side is devoid of any features, the right side has both the power/sleep and volume buttons (again, like a lot of phones out there). The top has a traditional 3.5 mm headphone jack and one speaker. The bottom has a mic port, micro-USB (no USB-C here) port, the 2nd speaker, and the SD card slot.

On the front you have a single multi-function home button, as well as an 8-megapixel selfie camera….a similar 8-megapixel shooter resides at the rear, sans flash. There is no special “Camera” section to this review: It’s a tablet. It has cameras. They work. They’re OK but not great. And they’re on a tablet. Let’s move on.

Here is one of the tablet’s prime features; a very nice 2560 x 1600 IPS display that is pretty impressive. Colors are well-saturated right out of the box. Huawei also includes the option to manually adjust the temperature of the device, which can have quite a visual impact. Also built in is an “eye comfort” setting, which takes a lot of blue hues out of the display for late-night viewing (the idea that the reduction in blues reduce the potential interruption in sleep patterns). The one caveat with this display is glare: there is tons of it, and unless you have the brightness cranked up and angle it right, viewing this beauty in the sunshine is likely a no-go.

If there is one complaint to lodge against this display, it’s the glossiness of it, which can cause a crazy amount of glare. Also, combined with the fact that Huawei feels obliged to throw in a screen protector gives me the feeling that this screen could be a scratch magnet. Please note I have not experienced any scratches, but I’m borderline obsessive with protecting my devices.

Prime feature #2 is the audio system built into the MediaPad M3. The highlight are the Harmon/Kardon-branded dual speakers on this device, coupled with some fancy hardware and audio software in the inside. This is probably the loudest non-computer I’ve ever heard; and it’s not just loud for loudness-sake. The audio is quite good all the way up, relatively speaking….but please don’t mistake this for a pair of real speakers. As the volume goes up, the depth thins out. While never getting “tinny”, a small amount of vibration appears on the shell, which I guess would be expected. It won’t fill a room for a party, but for personal listening it’s more than enough.
On the 64 GB version a pair of very nice AKG earbuds come with, but alas our review model is only 32. Sigh.

Here’s where the ‘mid-level’ of this review title hits home. Looking at the specs, you may believe that this tablet could be a higher-end performance machine. But in real life it didn’t quite get there…..though it’s in no way a slouch.

Playing higher frame-rate games will cause occasional graphic stutter, though only occasionally. It’s just enough to be noticeable while reviewing the unit. And definitely sits on the higher end of the extreme-heavy tablet market. This is certainly no Black Friday discount tablet, but it also shouldn’t guarantee perfect performance, either. 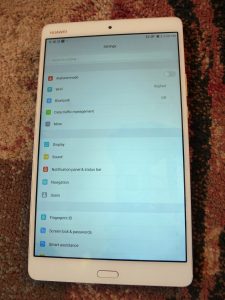 The interface is what Huawei calls EMUI, an Apple-like skin (my take) on stock Android. The review tablet runs EMUI 4.1 but EMUI 5.0 is out there and imminent.
Again, it’s OK. I have such a hard time rendering judgement on stuff like this. It works, it’s kinda pretty. But I do and probably always will prefer stock Android, so there. If you do want to read up more about EMUI, here’s a link.

One interesting nugget I found on this tablet is that there isn’t the traditional 3-button layout (back, home, recent apps) along the bottom of the device. There is just a single physical home button bottom-center. It’s not mechanical, just a capacitive/touch button, along with a fingerprint sensor.
Touching the button also acts as a ‘back’ button, if you’re several clicks into something. Swiping up or down takes you directly to a Google search page, while a left or right swipe will bring you to a EMUI-esque recent apps screen to peruse.

The fingerprint sensor works, but it can take up to a full second or more for recognition and action once scanned.

Overall I really liked the MediaPad M3. I consider myself “techie-frugal”, in that I like nice stuff that works consistently, but I’ll be darned if I’m paying what the likes of Apple is demanding.

The MediaPad M3 falls in what I consider my “just-right” slot of performance, quality, and price. What you get is a super-nice display and audio, a smooth interface, and almost top-end gaming performance. And you could buy almost two of these for the price of one iPad Pro (and 25% less than a Galaxy Tab S2).

If you’re looking to get out of the discount tablet jungle, but not comfortable with shelling over top-end dollars for a new tablet, I highly, highly recommend the Huawei MediaPad M3 8.0.

You can pick one up via this link on Amazon.