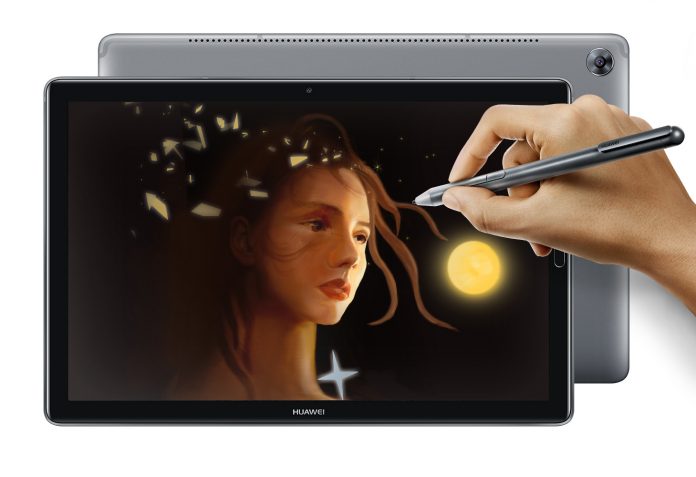 The new MediaPad M5 will come in two sizes (8.4″ and 10.8″) and two colors (Champagne Gold and Space Grey). The latter size will also include a Pro version. All models will run Android 8.0 with EMUI 8.0, featuring a custom Desktop Mode exclusive to Huawei devices. The MediaPad 5 will also have audio tuned by Harmon Kardon, Hi-Res Audio when connected to a wired headset, and are the first tablets worldwide to feature a 2K display with 2.5D glass. The Pro model will also include a HUAWEI M-Pen, featuring 4,096 levels of pressure sensitivity.

It appears HUAWEI is attempting to jumpstart the Android tablet market while also competing the Microsoft’s Surface Pro line. It’s a bold move, and in a tablet market that floundering pitifully, one that could either pay off in spades or sputter and die. With HUAWEI running into some trouble stateside lately, it really needs a win to break into the market. The HUAWEI Mate 10 Pro was announced for the US market to much fanfare at CES 2018, but the US Government has much to say about HUAWEI phones – much of it not good. This comes as a blow to the Chinese company, which has been trying to break into the market for years.

In a bid to win the 5G race, HUAWEI unveiled its new chipset, the Balong 5G01. This new, custom chipset supports the new 3GPP telecommunication standard, which will bring up to 2.3Gbps to the masses.

“5G technology will underpin the next leap forward for our intelligent world, where people, vehicles, homes and devices are fully connected, delivering new experiences, insights and capabilities. Since 2009, Huawei has invested $600million in research and development into 5G technologies, where we have led the way with innovations around network architecture, spectrum usage, field verification and more. From connected vehicles and smart homes to AR/VR and hologram videos, we are committed to developing a mature 5G ecosystem so that consumers can benefit from a truly connected world that transforms the way we communicate and share.”

It’s worth noting that Huawei has partnered with more than 30 global telecommunications carriers – notably, T-Mobile here in the States. As such, T-Mobile could potentially be the first of the major Stateside carriers to have a true 5G network. Such an accomplishment would be an absolute coup for the 3rd place telecom carriers. It would also be a win for HUAWEI: who, as mentioned above, is currently struggling in the US.