Preliminary data from the International Data Corporation (IDC) shows that smartphone vendors shipped a total of 342 million units in the second quarter of 2018. Compared to the 348.2 million shipped in the same quarter last year this is a 1.8% drop. Falling phone sales are not generally good news for handset makers but one has a reason to rejoice.

Huawei has moved up to the number two spot right behind Samsung and overtaking Apple in worldwide sales. News that I’m sure has Huawei excited as they expand and take on the top phone manufacturers in the world. This is only the second time that Apple has been knocked out of the first or second position in worldwide sales back in the second quarter of 2010. 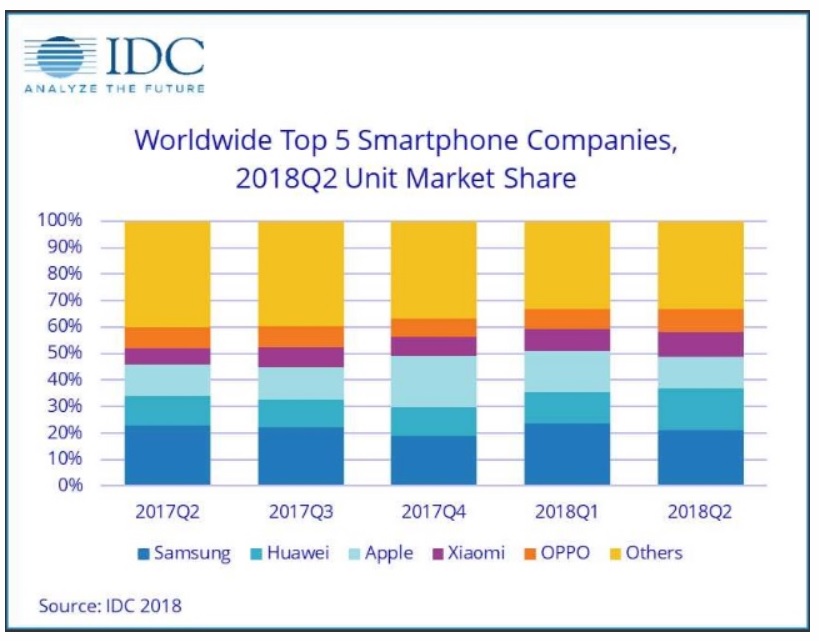 Huawei secured their position as second by shipping 54.2 million units in the second quarter with a record high market share of 15.8%. Its numbers were boosted by the popularity of the P20 and P20 Pro models, its sub-brand Honor, and its expansion into new territories. Even after all of that Huawei still has a long way to go for the number one slot. Samsung holds onto it despite a 10.8% drop in sales from 2017 with 71.5 million units shipped.

Samsung’s slipping sales numbers are most likely due to the lukewarm reception of the Galaxy S9/S9 Plus phones. The minor upgrade was not seen as a big enough reason for many of the Galaxy S8/S8 Plus users to upgrade. Most likely this will change with the upcoming Galaxy Note 9 and S10 models in the future.

Rounding out the top 5 are Xiaomi at number four with 31.9 million units shipped and OPPO with 29.4 million units shipped. Xiaomi is currently celebrating its recent good fortune overtaking Samsung in India as the number one seller. Without a doubt, it’s clear that Chinese OEMs are on the move and looking to grow their market share more every year.

It’s important to note that the iPhone X is still the top seller in the high-end market. Not only that but Apple has moved to the top position the past two holiday quarters after product refreshes. It is expected that the same will happen this fall after Apple refreshes their line up of iPhones with new features, screen sizes, and different price points.