Update: Today, Huawei officially unveiled the TalkBand B5. Aside from doubling as a pop-up Bluetooth headset, the wearable also offers a few fitness options. Like the ability to track activities such as running, walking and cycling and perform 24-hour heart rate monitoring (thanks to its heart rate monitor).

What’s more, since the TalkBand B4 is IP67-certified, the device can be worn during other types of workouts such as swimming.

The new wearable features a 1.13-inch AMOLED display with 2.5D glass on top and can be paired with an Android or iOS device. The battery has a 103 mAh capacity and Huawei says it can last up to 3 days of use. 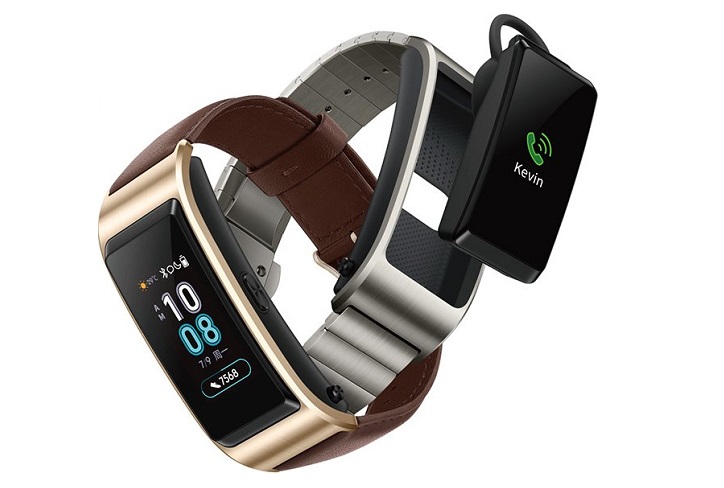 The company confirmed that some features will be restricted to owners of Huawei or Honor phones. So if you own a Samsung or a Motorola handset, you won’t be able to get caller ID or the ability to mute calls.

Huawei will announce pricing for the fitness band next week on July 18. Sales in China are expected to commence two days later. No word on a possible international release just yet.

Huawei is gearing up to roll out a new hybrid wearable device in the near future. It’s called the TalkBand B5 and is the successor of the TalkBand B3 which launched back in 2016.

Since the number “4” is considered to be unlucky in China, Huawei is jumping from 3 straight to 5 with this new release.

And this week we got to take a look at the upcoming fitness tracker, courtesy of prolific leakster @evleaks. Just like its predecessor, the TalkBand B5 is a pretty special wearable. Its display also doubles as a wireless Bluetooth earpiece that users can pop out and place in their ear.

Obviously, you’ll be able to pair the device with your Android or iOS handset, and use it to listen to calls or streamed music.

No info about specifications of the device is provided by Evan Blass. However, we can assume the fitness tracker will be able to monitor certain physical activities like running, walking, climbing or sleeping. The device should also be capable of counting steps and burned calories.

The TalkBand B3 features an iP67 rating which allows it to be submerged in up to 3ft and 3 inches of water for up to 30 minutes. So we can speculate the upcoming TalkBand B5 will also offer some kind of rating.

Huawei will probably make some improvements internally. For example, the B3 relies on a 91 mAh battery, so this year’s model might very well implement a larger power source.

When can we expect to see the wearable land on the market? It’s a mystery at this point. Although the July 9 date is displayed on the screen in the render. So chances are the Huawei TalkBand B5 could arrive as soon as next week.

In related news, Huawei has recently patented a wearable that can house a pair of Bluetooth earbuds. Interestingly, the headphones could come embedded in the strap of the watch.

Of course, this is just a patent, so it can’t be taken as a confirmation that the company will actually end up developing this product.