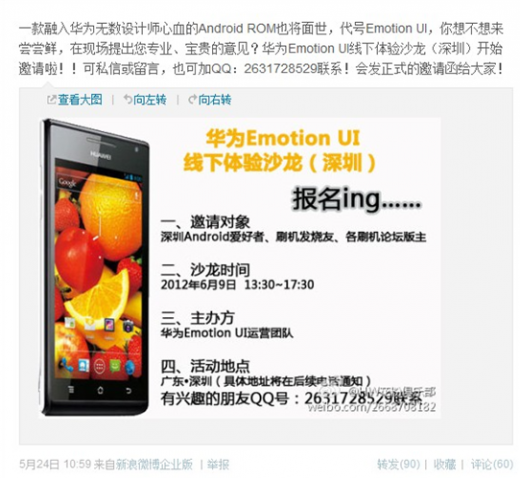 The competition between Android OEMs is getting stronger, especially between competitors like HTC, Samsung, LG, and Motorola. The UI customization is actually one of the main things that differentiate the Android experience on the devices from different manufacturers; It’s sometimes the reason people prefer a specific brand. Now, it seems that Huawei is also planning to introduce their very own user interface, which will be known as “Emotion UI”, and it will be launched in July.

As of now, nobody is quite sure when the current Huawei devices will receive this update. Huawei recently delayed the release of their flagship device, the Ascend D Quad, which should be launched in July featuring the latest UI. Though we don’t have much information about the UI, Huawei has said that it will be “emotional”, “simple”, and “smart”; words that many manufacturers have used to describe OSes in the past. Huawei is holding an event on June 9, and we hope that we will hear more about this new interface.

I personally think it’s a good move by Huawei to compete with brands like HTC, Samsung and others in the smartphone market, because that’s one of the ways to snag customers from other companies and expand the market out. Are you interested in Huawei’s UI? Tell us about it in the comment box below.