If you are a mobile industry enthusiast such as me then you’ve got to love MWC. Three days of pure mobile madness. The Chinese manufacturer announced four products during its press event; the MediaPad X1 and M1 tablets, 4G powered Ascend G6 and TalkBand B1 accessory.

The device that draws us in first is the MediaPad X1; the lightest and narrowest amid the 7-inch form factor. Well, at 239g of weight, and 103.9mm width the statement seems legit. In addition, the tablet features 7.18 mm thin bezels. Woah. 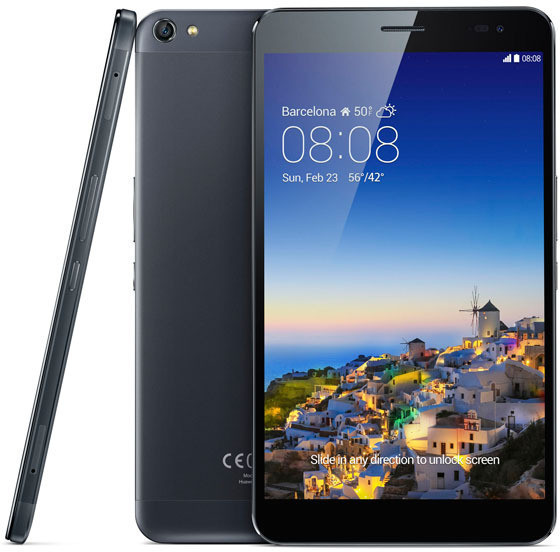 As far as connectivity goes, beside WiFi and Bluetooth the MediaPad comes with LTE compatibilty and is capable of conducting calls; so it’s a phone at the same time. Specs wise, the tablet houses Huawei’s own HiSilicon Kirin 910 chip, with four cores each clocked at 1.6GHz. The processor comes along with Mali-450 GPU and 2 GBs of memory.

To run the juice Huawei included a 5,000 mAh brick that can keep the device alive for 21 days on stand-by and 5 days of continious usage. The X1 provides the user with a 13MPix primary sensor on the back accompanied by a LED flash and 5MPix front-facing camera for high quality selfies.

Huawei’s new tablet sports a 7-inch IPS display of 1200×1920 pixels resolution with a pixel density of 332 ppi. The screen-to-body ration is 80%, hence the bezels are phenomenally thin.

The right compartment on the back houses the SIM and microSD card slot. The internal storage of the tablet is 16GB.

Huawei will be shipping the device with Android 4.3 Jellybean with  Emotion UI 2.0 on top, though there is still chance of hitting the shelves with 4.4 KitKat on board. Price wise, the X1 will set you back 399 euros, approximately US$480.

What do you guys think of Huawei’s newest entry to the 7-inch market? Sound off in the comments below.