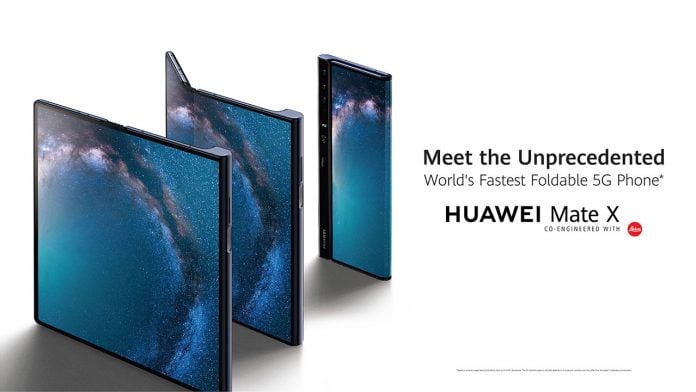 Let the battle of the foldable phones begin. Samsung struck first with its Galaxy Fold model for MWC 2019 but Huawei’s Mate X makes it look like a prototype. Utilizing a flexible OLED screen and what Huawei has dubbed the Falcon Wing Mechanical Hinge Huawei has given us the best looking foldable phone yet.

The Mate X outclasses the Galaxy Fold’s design in every way by giving you an 8-inch edge to edge display without a notch at a mere 5.4mm in thickness. The Mate X also only needs three cameras instead of the six you’ll find on the Galaxy Fold.

When in the closed position you can shoot photos as you normally would using the large 6.6-inch screen as a viewfinder. If you want to take selfies, simply flip it around and you have a large 6.38-inch preview. What makes this even more useful, is the fact that you can have both screens on at the same time giving your model a mirror view while you take their photo.

Just like the Samsung Galaxy Fold, the Huawei Mate X is packed with high-end specs including the Kirin 980 CPU, 8GB of RAM, 512GB of storage, and a 4500mAh battery. The Mate X even features Huawei’s Balong 5000 5G modem making it capable of superfast 5G speeds.

This phone exudes speed from its 7nm processor, to the 5G modem, to even its 55W SuperCharge battery charging. Something that will be most welcomed with such a large battery to charge.

While the specs are top notch the real genius here is the design of the Mate X. Huawei’s wraparound approach with a built-in grip is practical for a couple of reasons. It makes the most efficient use of the cameras and gives you a handle to use when in tablet mode. When folded over the screen uses two magnets to hold itself closed and to release there is a button on the grip which allows you to unfold the screen.

Despite the clever and eye-pleasing design, it is possible that could be the worst part of the Mate X. The use of an outwards folding design might not be as durable as an inwards folding model, such as the Galaxy Fold. Another issue could be the oversized nature of it even when folded it could be a challenge to fit in your pocket. It is still early days for this new breed of cellphone and there are sure to be a lot of lessons learned as they evolve.

The Mate X is expected to launch sometime mid-2019 in Interstellar Blue with a hefty 2,300 EUR ($2,600 USD) price tag. Huawei has yet to give any details on carrier or partnership deals.