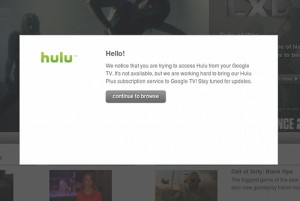 It seems that I have a problem. Whenever something comes out with the Google logo on it, I am drawn to it in a way that has been described as “reason enough for scientists to rethink motion based physics”. I am a happy beta supporter, and feel that my opinion in those arenas help in some small way to engineer the future of that device. So, like every other Google product, I have a Logitech Revue. I accepted the device for what it was, despite not being able to fully enjoy it (I don’t yet have a HD cable box).

My wife, on the other hand, is not a fan of beta anything. When she purchases something, it had better work as advertised or she will likely never touch it again. Foolishly, I left my TV tuned to my Revue, and it’s keyboard out. My wife, assuming I had just gotten another keyboard for my HTPC, proceeded to navigate to Hulu and pick out an episode of House. Imagine her surprise when she was presented with Hulu’s denial message appeared, specifically targeting Google TV. Since Android Guys is a family focused organization, I can’t share the email she sent to Hulu expressing her opinion of how Hulu was handling Android devices and Google TV. I can, however, share the response she got within 4 hours from Hulu.

Thank you for writing to me. I will be more than happy to explain the situation. When we first launched Hulu.com (a few years before Hulu Plus) all the streaming
rights we had gathered for our content were for personal computers. Now that all these new television connected devices (like Google TV) and mobile devices like iPhones/iPads) have proliferated, we’ve been expanding our service by launching Hulu Plus in order to gather the rights to stream over those new devices. We have to renegotiate on a show by show basis and on a device per device basis and while we do have a lot of great content and devicesready for Hulu Plus, we’re still working to make it all available on all devices with an internet connection. Basically what it comes down to is a streaming rights issue. As of right now, we just simply do not have the rights to stream content from our website on Google TV platforms.

We have plans to bring Hulu Plus to as many devices as possible and are continually evaluating new technologies, and will be working to add more devices based on user demand. I have seen plenty of demand for Google TV (with good reason!) and hope I have better news for you soon as we work with our content providers and device manufacturers to get the rights for Hulu Plus to be streamed over more devices. Unfortunately, these negotiations sometimes take longer than we would hope but be assured we are working hard to expand our services! I do apologize for the frustration caused by this streaming rights discrepancy. It’s not our goal to block users from our services but we just don’t have the negotiations worked out to stream content onto Google TV devices yet. If you have any other questions or concerns, or if anything I described is unclear please get back in contact with me and I’ll be able to assist you further!
Thanks,
Casey

At first glance, my gut told me this was a canned answer, something that got sent to anyone who used word combinations like “angry”, “Android”, or “Class Action Lawsuit” and “Never use your service again”. The more I read it, however, I felt that this actually came from a person, which made me a lot happier. If this is legitimately something that is temporarily out of Hulu’s control because they didn’t expect they would become so popular AND like everyone else there was no way to know that mobile would explode like it has, I could accept that. Will I pay for Hulu plus on my Google TV? No, probably not. Would I use Hulu’s ad supported system on Google TV? It’s a lot more likely now.

In short, Hulu is walking a short line. Either this is just a line they are feeding everyone so they can make an extra buck, or it’s a legitimate issue they hope to fix once they renew contracts. Does this excuse any of the other websites who have blocked Google TV? Of course not. The bottom line is Google TV is under harsh scrutiny because it blurs the line between computer and set top box. Users see a browser and expect it to act a certain way. If a user comes to a website on that browser and they find that the owner of that website has decided to deny content to that browser, the user will not take their aggression out on the browser. I think this is proof of that. 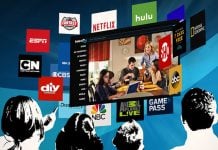 Cut the cord! Get three years of SelectTV for just $29