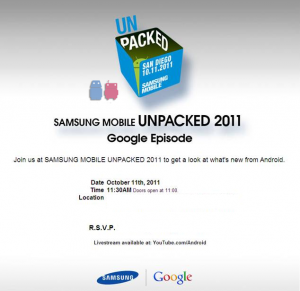 Samsung begun sending out press invitations to their next “Unpacked” event, slated for October 11th.  Kicking off at the same time as CTIA, this is likely the day and event where we’ll get our first look at the next version of Android – Ice Cream Sandwich.

Typically, these Samsung events aren’t specifically tied to Android, however this time it’s going to be front and center.  The event itself will be broadcast on the Android YouTube channel and is even being called a “Google Episode”.  Rather than simply showing us something new from Samsung, this Unpacked promises we’ll see “what’s new from Android”!

The rumors have been rampant for a while now that Ice Cream Sandwich would be announced in or around October so this matches up quite nicely.  Will we see the Nexus Prime?  A Prime Droid? Droid Prime?  Who knows for certain?  We’re  overflowing with anticipation now and can’t wait to see find out what’s on the agenda!