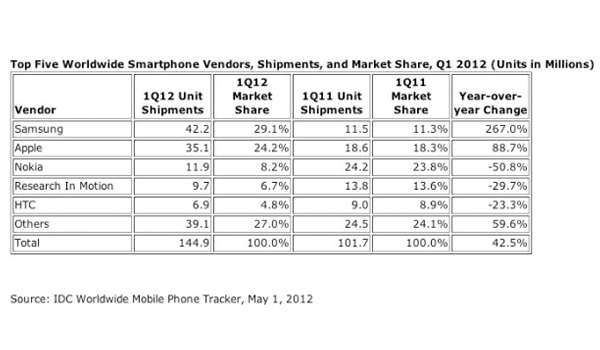 Research firm IDC tells us that the Android arms race is fast becoming Samsung’s to lose.  New figures out of the IDC camp show that Samsung moved 42.2 million smartphones in the first quarter of the year (2012) whereas HTC trailed with 6.9 million.  The numbers are a snapshot of the world market and factor in all comers, including Apple, RIM, and Nokia.

For it’s part, Samsung had11.5 million in the same time frame last year, meaning it had a 267% year-over-year change.  Contrast that with HTC who was sitting pretty with 9 million units in Q1 2011.  Down 23.3 percent year-over-year, HTC actually lost market share.  There are plenty of reasons to consider for the drop and even HTC will tell you they dropped the ball.  However, with the hype surrounding the Galaxy S III’s announcement this week, we have a hard time seeing Samsung anywhere but the top.  We’re optimistic, however, that HTC will begin to move the needle forward and get back some of that market share with the renewed focus and One series. 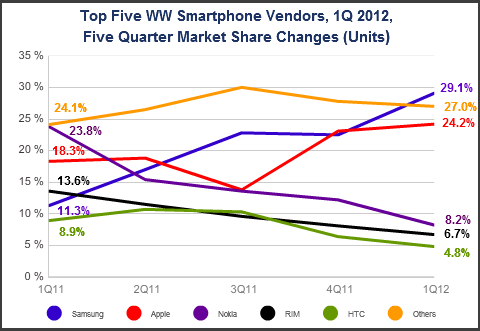 In the bigger picture, Apple is the number two smartphone manufacturer with 35.1 million units in the first quarter.  Up from 18.6 million in the same time frame last year, the company nearly doubled (88.7%) its pull. Nokia now trails in third with 11.9 million Q1 sales, netting about half of its 24.2 million figures from one year ago.  For those not paying close attention, this means Nokia went from top dog to third place in the span of a year. Considering that RIM netted 9.7 million in Q1 2012, it stands to reason that 5th place could be up for grabs or subject to changing.

Who would you expect to see in the top spots this time next year?  Will it be Samsung and Apple running things for the next few years or do you see a dark horse emerging?