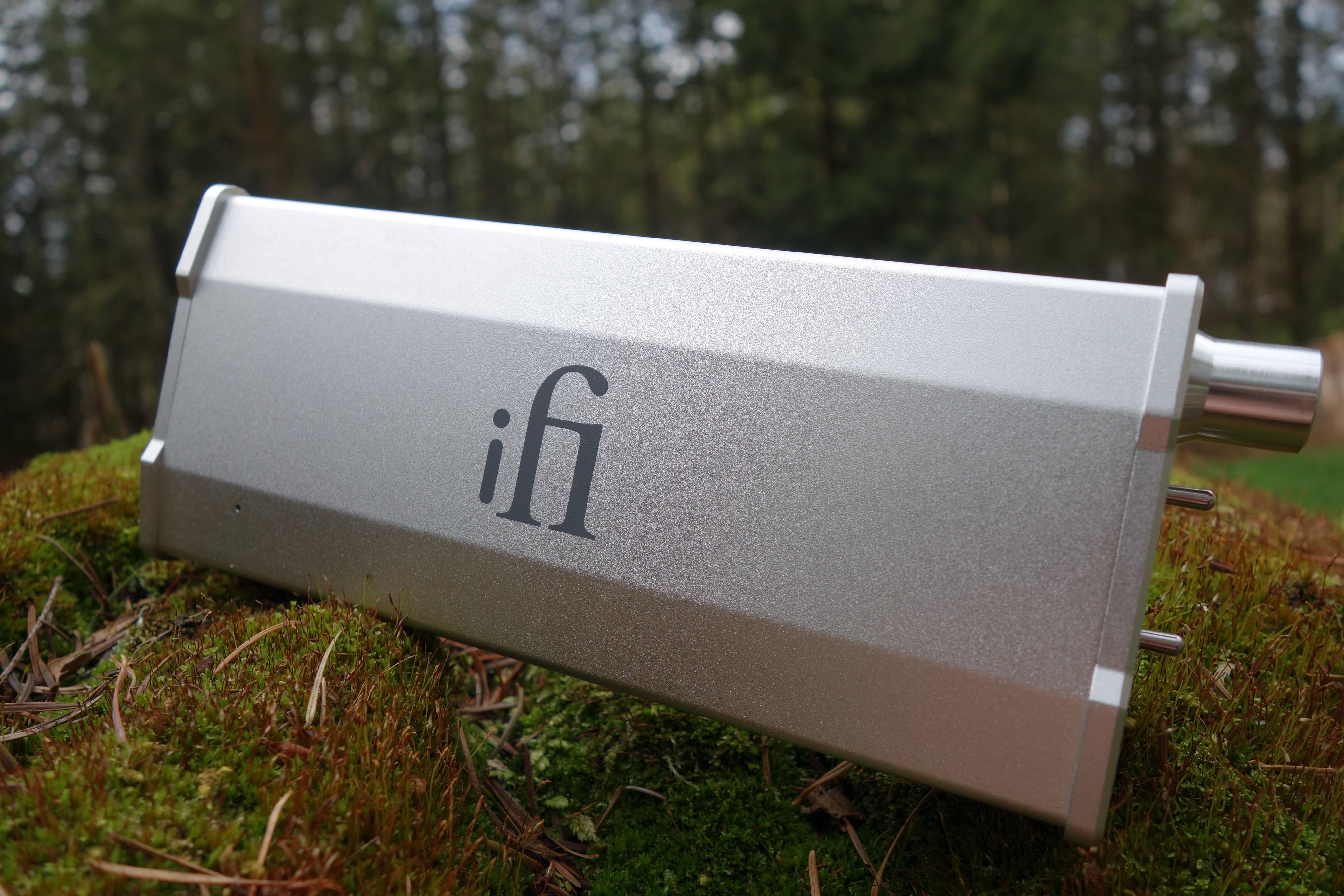 I love how DACs come in all different shapes and sizes today. They’ve historically been reserved for the niche audiophile market, but as of late, the appeal of a dedicated sound processing unit has grown considerably. Mainstream headphones now have audio prowess and streaming services are pumping out truer tunes. Even some phone manufacturers are jumping onto the bandwagon by tacking on HiFi-capable internals, such as with the LG V10, ZTE Axon Pro, and HTC One A9. The newly announced modular LG G5 even has a HiFi DAC module add-on.

But all DACs aren’t created equal. Some sound drastically better than others, which can be super frustrating. It’s not like they’re readily available for us to test out in stores. That leaves us with only word of mouth. Therefore, at AndroidGuys, we’re ramping up our audio coverage, to give y’all some informative insight and help those tough buying decisions.

Today, we have one of the best DACs I’ve personally tried – the iFi Micro iDSD. 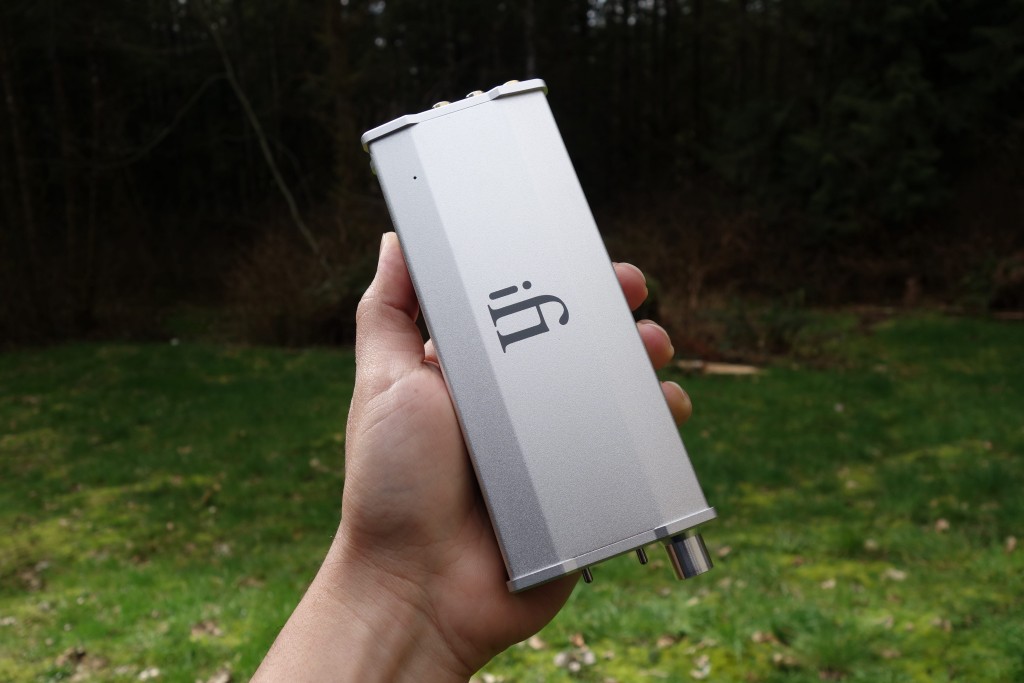 The company, iFi Audio, comes from the Abbingdon Music Research (AMR) family of HiFi gear (that can run upwards of $10K). The iFi team has taken that AMR expertise and trickled it down to more affordable devices. Seems that was a good move, because its flagship mobile DAC has hit the audiophile scene pretty hard and won the hearts of many. I wanted to see what all the hubbub was about and iFi Audio was kind enough to send me a review unit. It’s not the most compact device, but I’m recommending it for audio lovers nonetheless. Let’s go over why that is.

The Micro iDSD is a big slab metal. Other than the smooth, anodized finish, the design from every angle is industrial and raw. And that’s perfectly fine. Metal is premium and robust all on its own. There’s machined edges and lines all over, so its definitely not boring either. 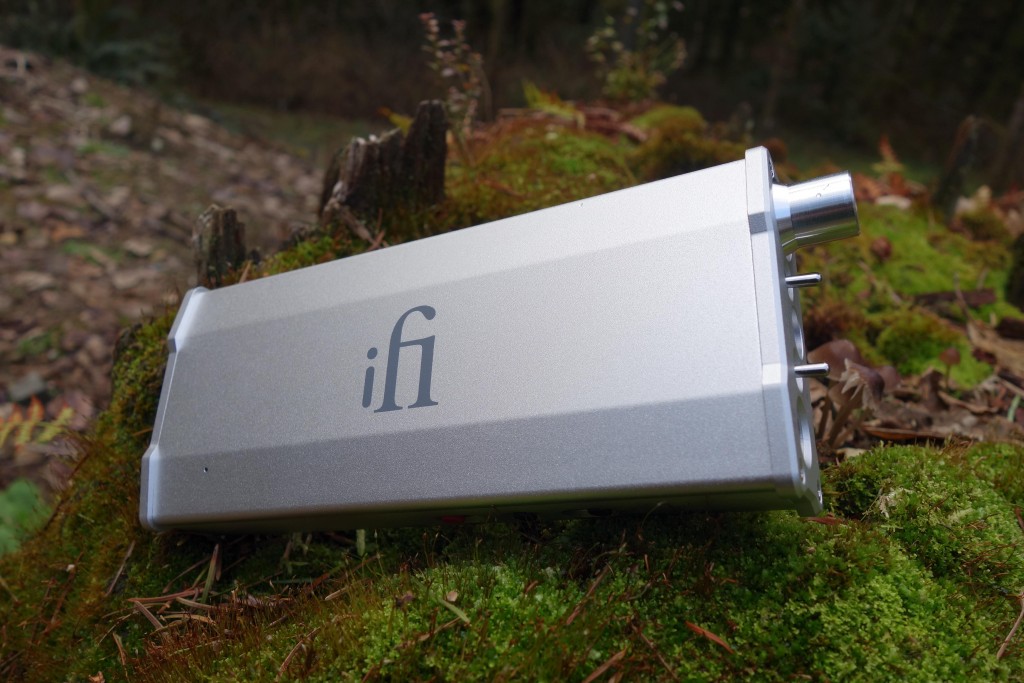 As I mentioned earlier, the Micro iDSD is on the large-side for a portable DAC, but iFi did in fact make a portable unit here. It has its own battery and can interface with an Android device (via OTG) for the music source. I think the reason for its girth is because iFi puts audio quality and features above all else. We’ll get to the sound impressions later, but as a hint, I’m convinced that the size is worth it.

Let’s continue with the tour. There are I/O on both ends and switches for unique features all around the device (which I’ll get to in the next section). While the Micro iDSD is a mobile unit, iFi built it with flexibility. That’s why on the left end you’ll see A/V ports for SPDIF In/Out and coaxial Left/Right channel outputs for an entertainment system. 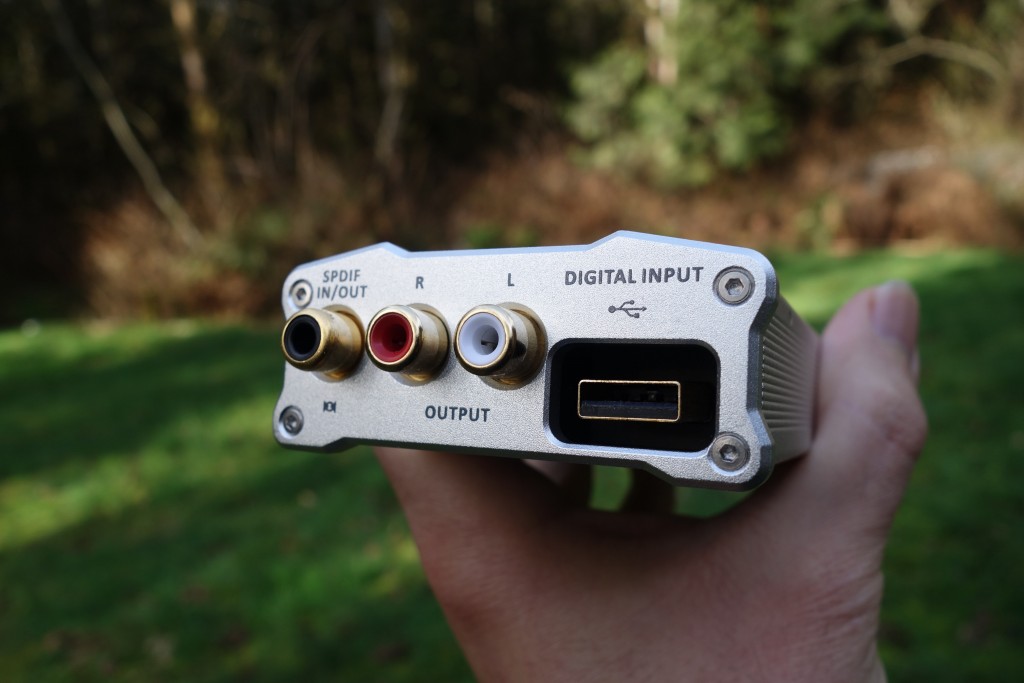 Here is also where the audio source goes in. Strangely, this Digital Input port is a full-sized male USB connector. That means to hook up your source, you’ll be using a cable with a female USB connector on one end and the respective male port on the other (USB, micro-USB, Lightning).

In the packaging, there’s a female USB to male USB cable included (for connecting to a computer), but unfortunately no cable for any mobile devices. So you’ll have to hit up Amazon or something for a micro-USB compatible cable.

The other end of the unit is where you plug in your headphones and control the volume. The headphone jack is full-size (6.3mm), but thankfully iFi included a 3.5mm adapter in the box. If you prefer to send analog audio into the DAC (rather than digital), there’s also a 3.5mm input here. The volume knob is rather large, but I appreciate that it allows you to finely tune the attenuation. It firmly and smoothly rolls to suit your sensitivity. It’s also serves as the power switch. Rotate the knob clockwise from the starting position and you’ll hear a click that turns the DAC on.

You’ll spot a USB opening on one of the sides. This allows you to draw power from the Micro iDSD’s hefty battery (4,800mAh) to charge your mobile device. That’s one benefit about the bulk, it can also be a power bank. Lastly, there’s a tiny multi-color LED light on the top of the unit. It does typical indication, like a Blue light for charging or Red for low battery. But iFi goes a step further and uses its other colors to indicate the format of the audio signal. The Micro iDSD supports three different encoding technologies – PCM, DXD, and DSD. 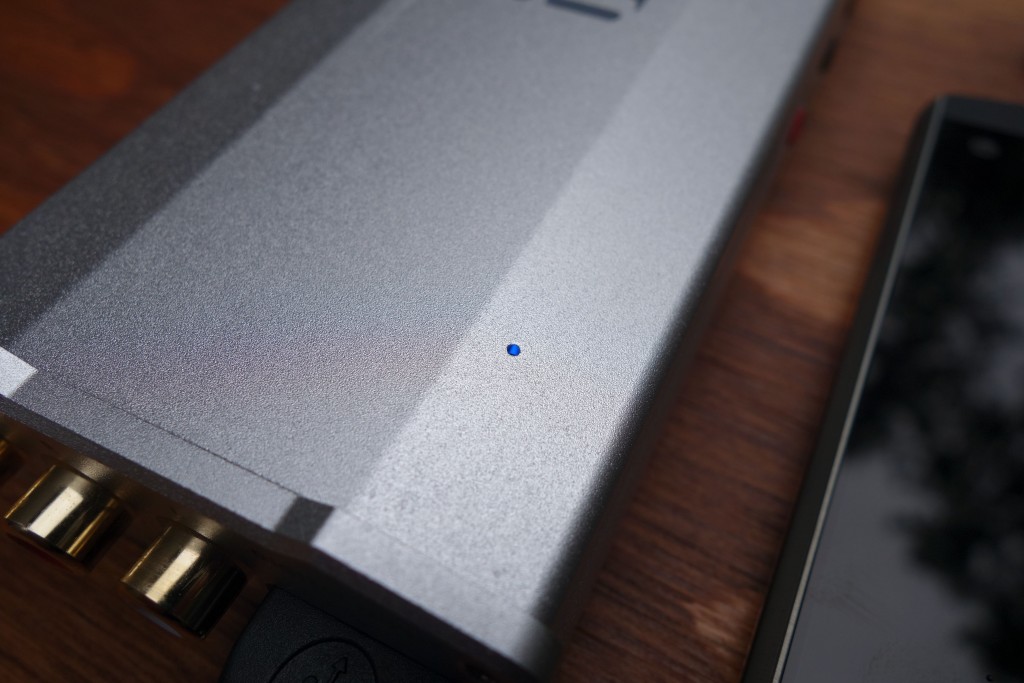 Another benefit of the Micro iDSD’s beefy size is that it can pack a lot of features. Some of these are features you won’t find in another DAC. On the end with the headphone jack and volume knob, there are two switches for audio enhancement – XBass and 3D Holographic. What they do is self-explanatory (XBass extends the bass response and 3D recreates a holographic sound field), but an important thing to know is that they add to the analog signal (after it’s converted from digital). iFi doesn’t want to mess with the true, original signal or risk negatively impacting other sounds.

On the underside, there’s generous feature called IEMatch. It’s pretty common these days that earphones (aka In-Ear Monitors or IEMs) are sensitive, meaning that it doesn’t take much volume before they get too loud. That can be annoying depending on the volume control of the source. Therefore, iFi threw in two different levels to help tame the volume – High Sensitivity and Ultra Sensitivity. 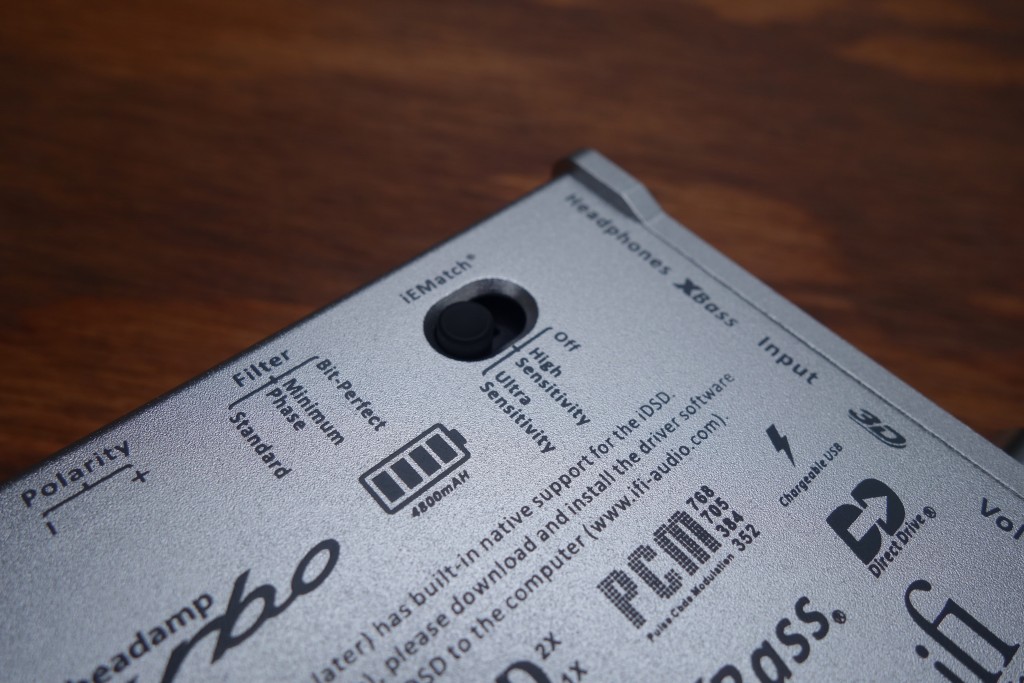 Behind the scenes, these are probably two degrees of attenuators (or can be thought of as gain reducers). The important thing is that they keep the sound true (something that resistors typically struggle with; so iFi probably had to work some magic there). I have super sensitive IEMs, the Shure SE846, and on the Ultra Sensitive setting there is zero noise (hissing) and I for the first time have adequate control over the volume level.

The other features are a bit more technical, but I’ll briefly run through them: 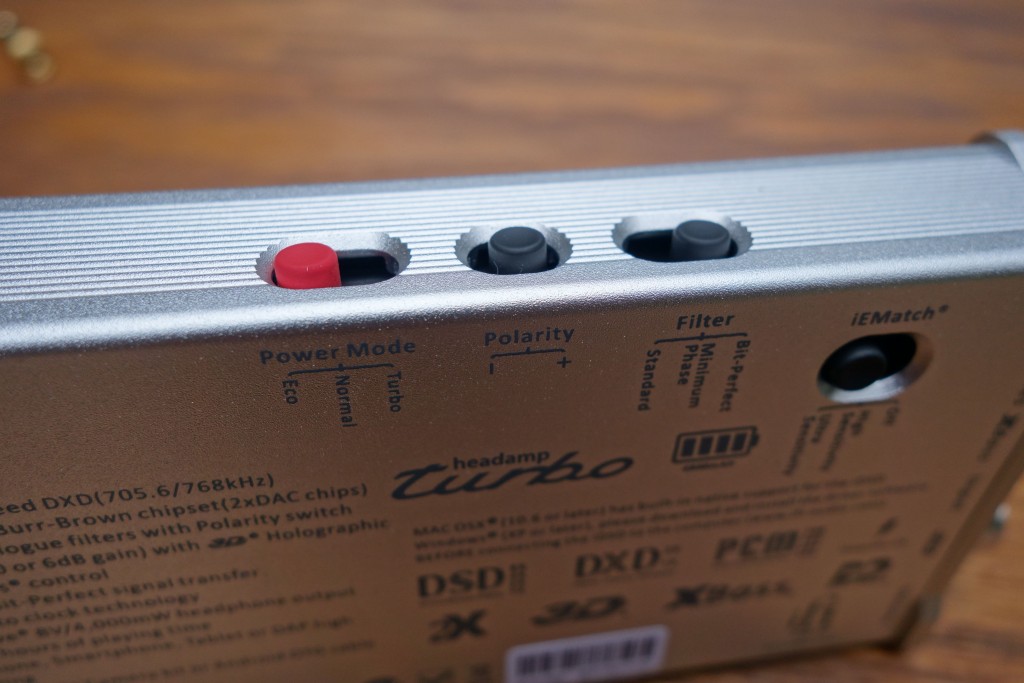 When I look at the size of the Micro iDSD, I’m like, “This thing better bring it!” Personally, I’ve only used the more typically-sized portable DACs, which are roughly the size of playing cards. They already sounded great to me, so I was suspicious over iFi’s beefy strategy. But boy did I get a reality check with this one.

There are two things that hit you straight away on the first listen – Clarity and Fullness. By clarity, I’m talking crisp, crystal clearness in details you may not have even noticed before. I also mean it in terms of separation. Even when there’s a lot going on, the enunciation of the instruments, vocals, etc. just come through beautifully. And when the music calms and you hear only one or two elements, this allows your brain to focus and adore the minute nuances. You can hear whispering from voices or damping of instrument vibrations. It’s also an eye-opener when you realize what your headphones can really do.

I notice the entire spectrum being more impactful and richer than with other DACs I’ve used. The overall sound is more encompassing (like from a sound system), which of course makes the experience more engaging and fun. The sounds are balanced, and elements only hit hard when the recording asks for it. I can tell that iFi does its best to honor the recording and artist’s intent.

The whole presentation is so tight and controlled. I get the sense that iFi knows what it’s doing, in terms of precision and equal amount of enjoyment. I usually find something that I don’t like about a reproduction, but the Micro iDSD really makes it difficult to not call it perfect. I could say that sometimes I wish the low-end hit harder, but then there’s the XBass setting (which adds on the extra oomph). 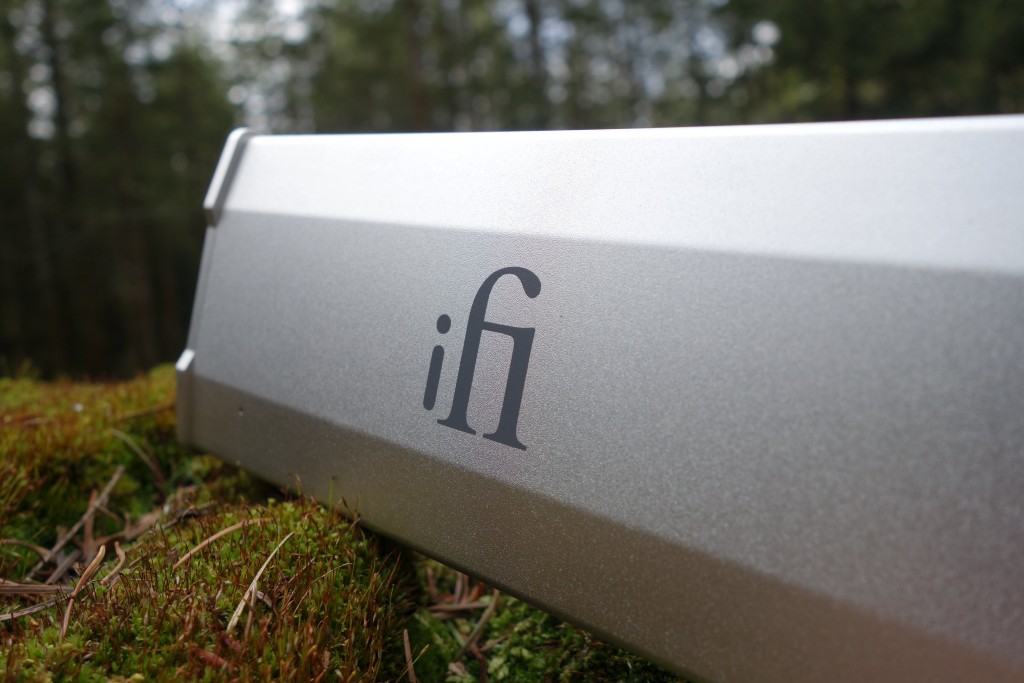 So there you have it. The superb sound reproduction of the Micro iDSD just left me awe struck. So much that so that I stopped caring about the size – I need this thing in my life.

The Micro iDSD won’t be for everyone. It really depends on your headphones and your budget (it’s not cheap, at $499). But if you’re at that point and looking for the best of the best, you cannot gloss over this DAC. The Micro iDSD is seriously going to be hard to top, and now I’ll think twice before I consider a small DAC.

I must mention that iFi does have a more compact solution – the Nano iDSD. It obviously doesn’t pack as many features as the Micro, but it makes iFi’s expertise more reachable with a price of $199.