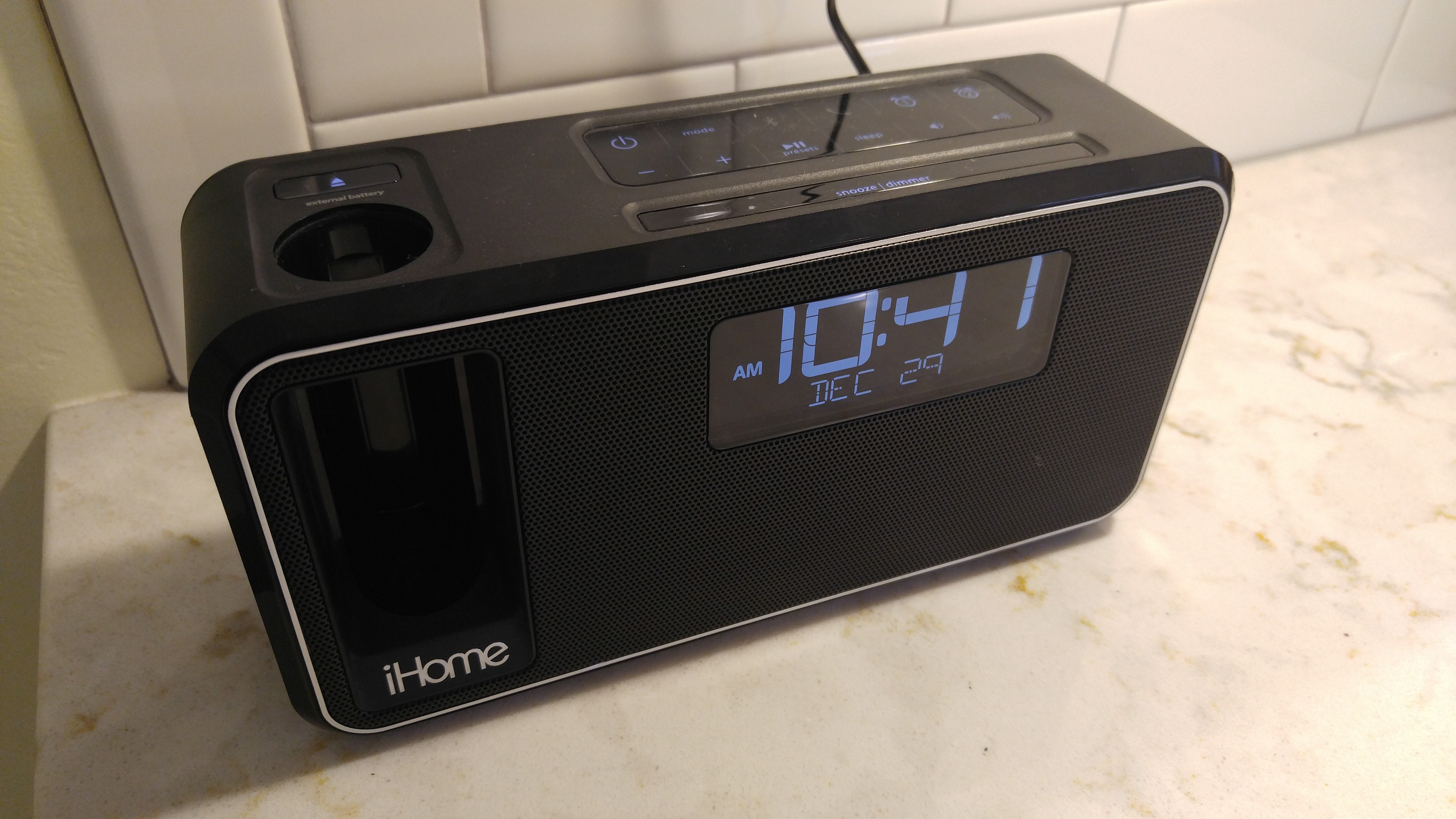 Bluetooth speakers and portable batteries. We do many reviews on both but this is the first time I had the opportunity to review the best of both worlds in a single package. iHome has been a mainstay with mobile accessories getting its start in 2005. In its first year in existence it became the number choice for speakers with the popularity of digital music and the iPod. Just over ten years later and iHome is still rocking the accessory market with a full line of products of alarm clocks, clock radios, portable speakers, and more. They are a globally recognized brand and can be found at Best Buy, Walmart, and Target.

Sometimes when we see brands everywhere we immediately think “generic” but iHome’s Kineta K2 iKN105 all in one speaker is anything but that. It has a slot built-in for a portable battery, a Bluetooth connection for your smartphone or tablet, a large clock with an alar, six presets for FM radio, and the ability to work as a speakerphone. 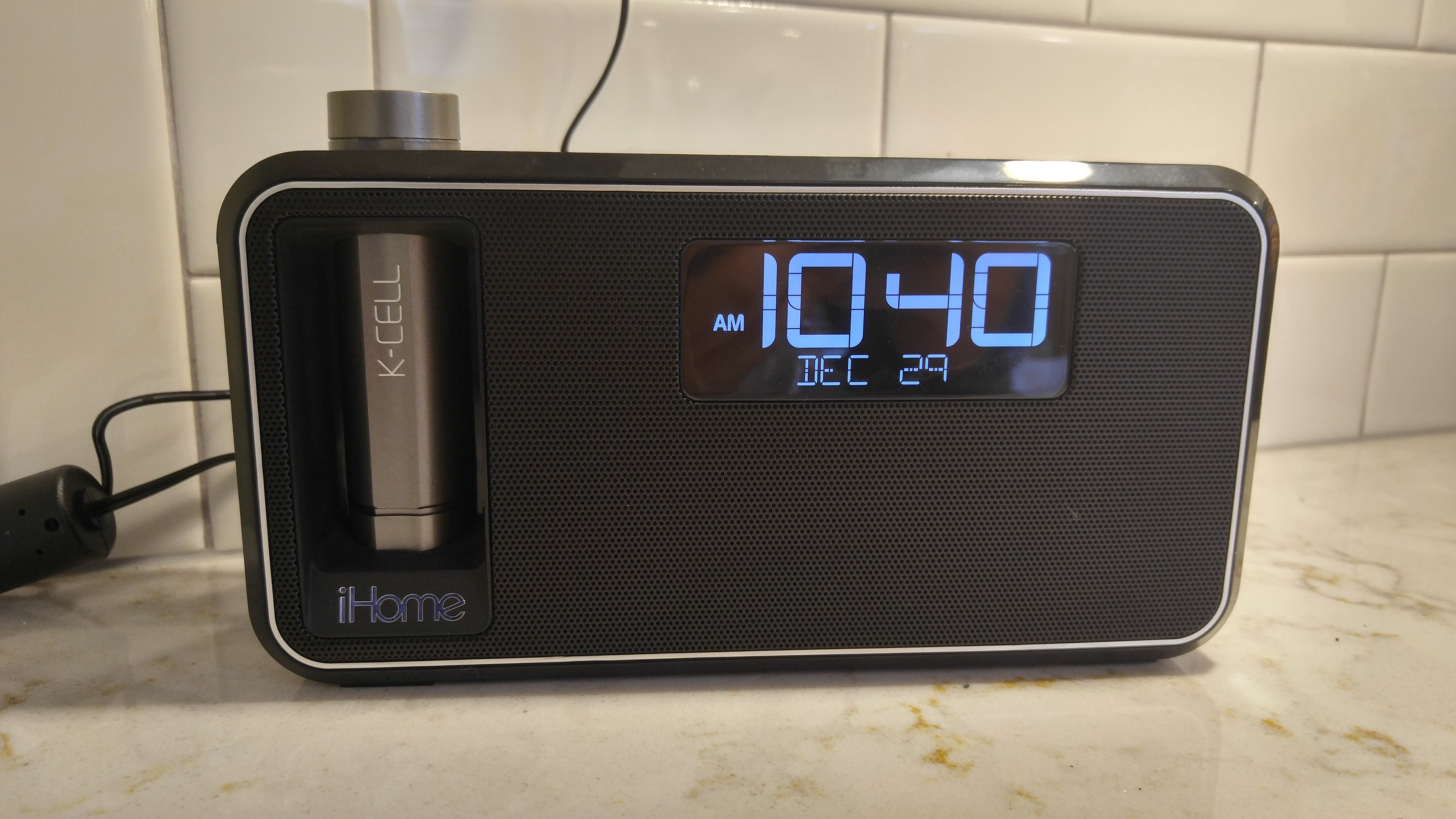 With over ten years of design experience, iHome knows how to fit tons of features into a compact package. The iHome Kineta K2 is a full-featured smart speaker that is built for every home. The portable battery that comes with the K2 has a slot on the left side of the speaker specifically to house it. The K-Cell itself is a solid metal battery than has enough power to recharge most phones one time with a 2600mAh capacity.

The speaker is made from a solid and durable matte plastic, and comes with a plug-in antenna, AC adapter, K-Cell battery, and a USB charging cable. There is a full sized USB port on the side of the speaker to charge one smartphone or tablet. The front houses a clock with the month and date.

All of the controls are touch based with a panel that covers it on the top of the device. This will help prevent actual buttons from wearing out or dirt and debris from slipping inside of cracks and crevices. It’s not a thing most people think about, but long term this should make the speaker last for many years to come. 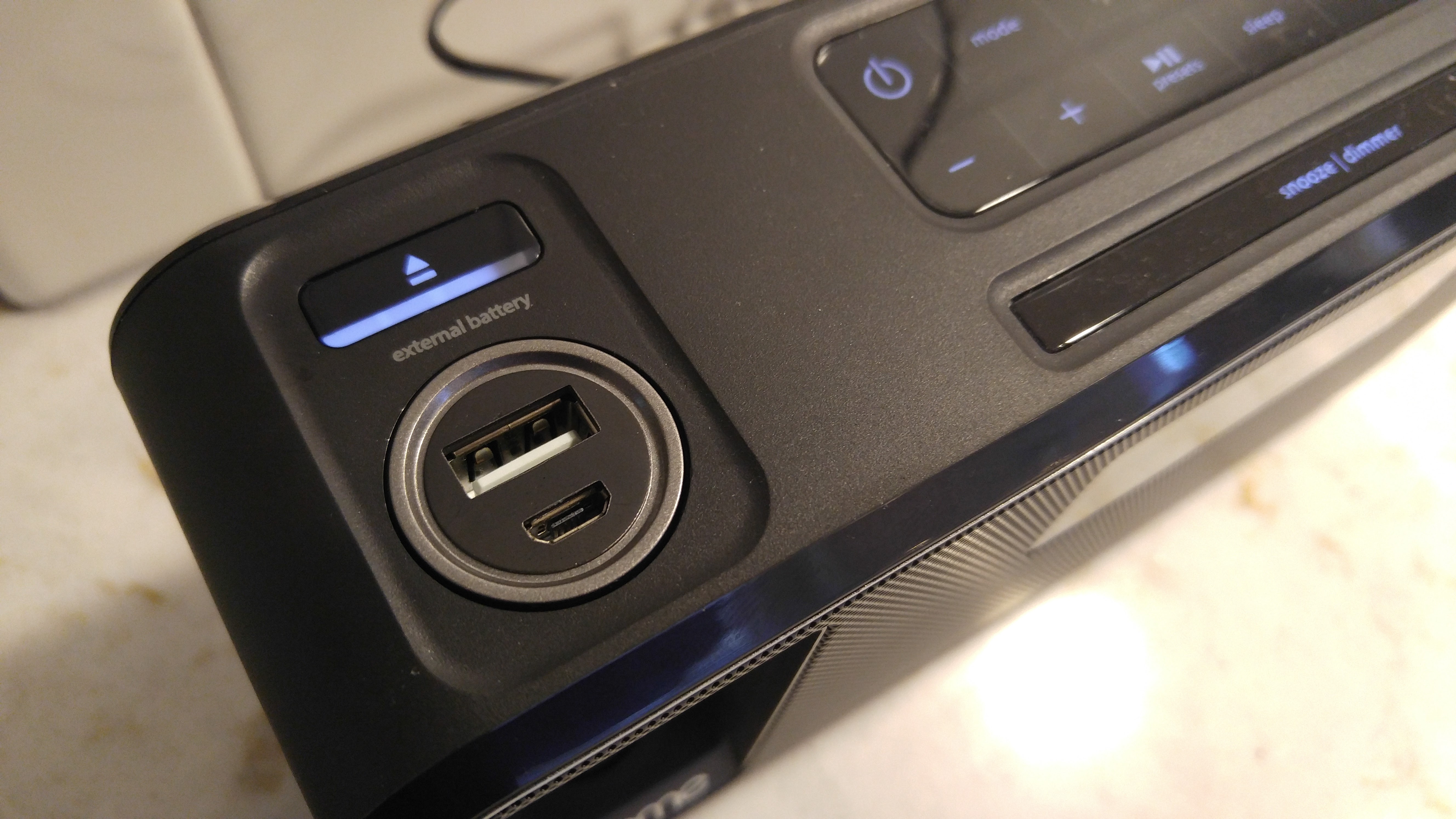 My kitchen doesn’t have clocks built the appliances, as I have a stove and oven with eight gas burners. In general most stoves and ovens do have a clock built in, and when I am cooking having a clock is vital to knowing when to add certain ingredients. Many wireless speakers do not have clocks built into them, but the iHome K2 is an all-in-one system with a large clock in the front. I know this is a trivial feature to some, but for me in my kitchen is a must have. It can also serve as the perfect clock for your nightstand with two settings for alarms. 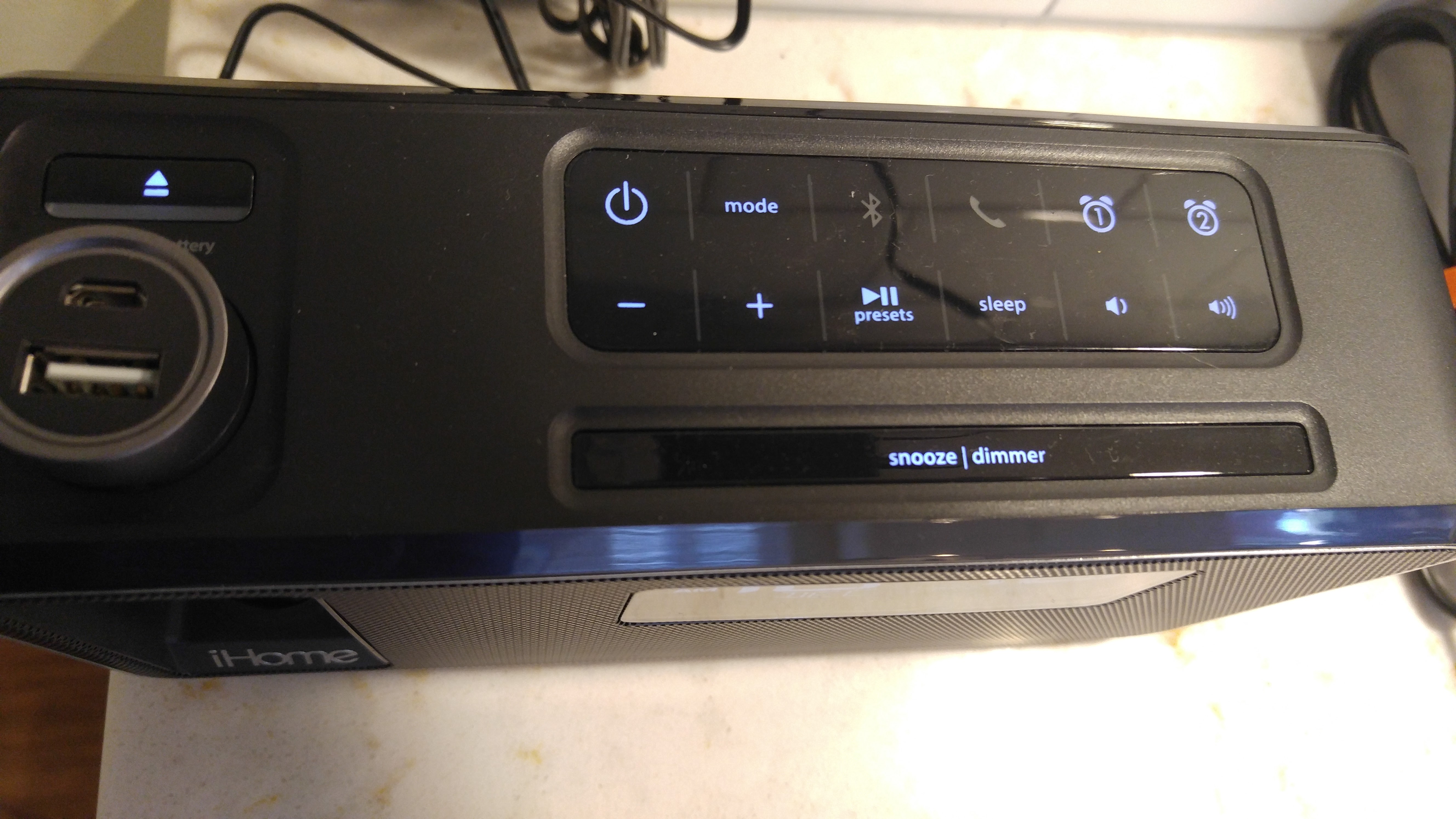 Being an all-in-one speaker means it also has to sound great. If I bought a clock for just the time I could get something far cheaper. The Kineta K2 on the other hand has front facing drivers built-in, and to my surprise they not only are loud but also sound fantastic. No the Kineta K2 isn’t your next concert hall set-up, but it doesn’t claim to be that. It does offer great quality sound at low, medium and high volumes in my kitchen and I found myself singing along to songs more often than I would like to admit. The sound is clear, balanced, warm and great to listen to FM radio, stream Bluetooth music or podcasts, and to make calls on. You do need to be relatively close to make clear calls though.

With a portable battery slot specifically designed for a single use battery, the Kineta K2 offers convience in power where it is typically a seperate feature. Portable batteries can cost anywhere from $10-50 and can easily be misplaced. The Kineta K2 has a K-Cell battery designed to lock into and charge into a specific slot designed just for it. The battery itself isn’t huge, and will only provide one charge to most phones. Typically most people don’t need more than one charge, and the K-Cell is perfect because it is highly portable and durable. It’s also great to have sitting in the speaker as a back-up just in case of a power outage. The external battery fits flush into the speaker and has an eject button that seemlessly pops the battery up from the charging slot when you need it. 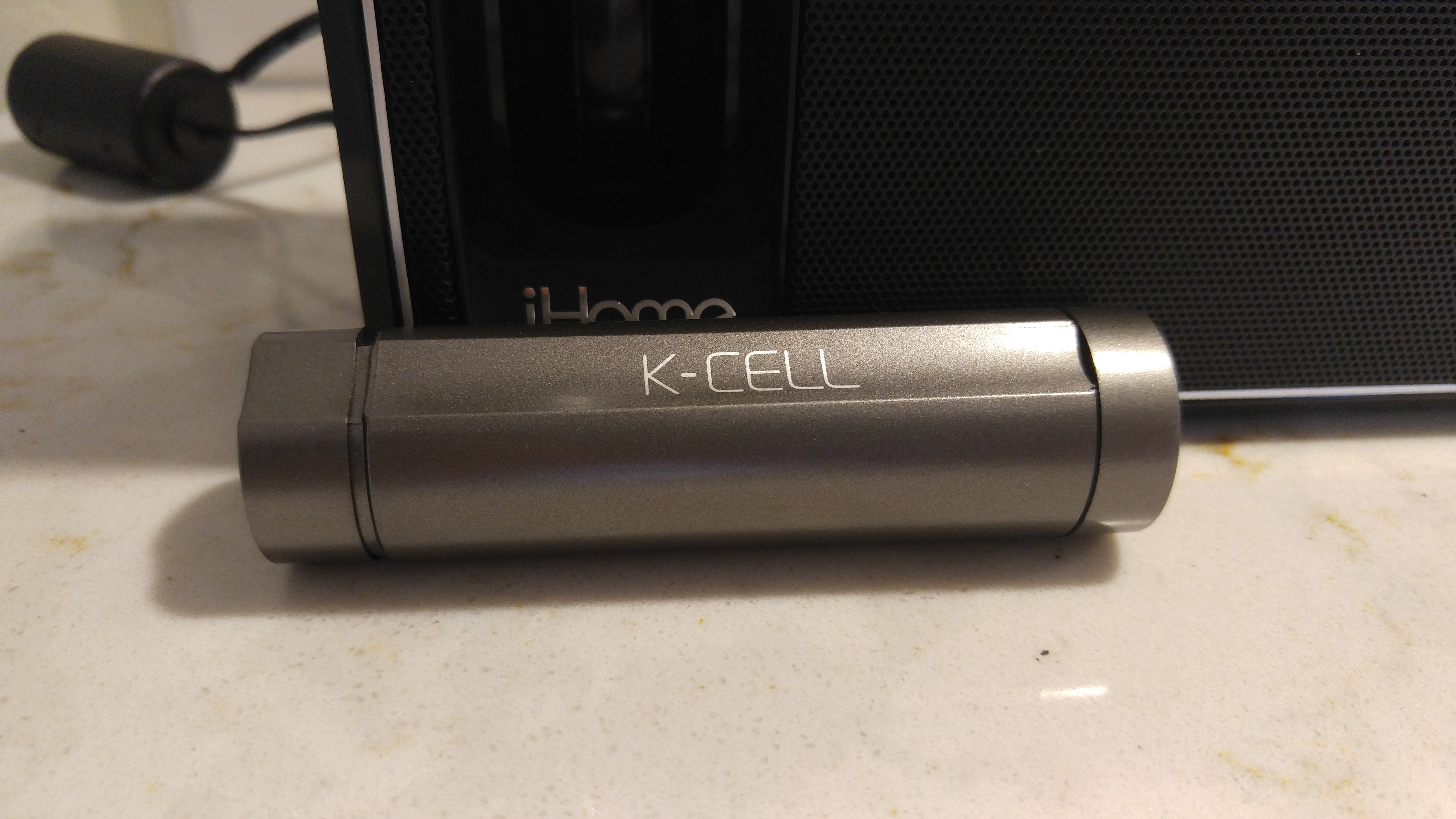 The Kineta K2 which retails at $99.99 is now on sale for $79.99. At both prices you not only get a Bluetooth speaker, but you also get an alarm clock, portable battery, USB charger and a portable all metal battery. It’s a nice all-in-one package that simplifies the amount of gadgets you have while most importantly offering great sound. Sometimes it is easy to think a speaker from Walmart or Target might sound generic but the Kineta K2 is anything but generic. iHome has been around for over ten years now and knows how to make great products at even better prices.