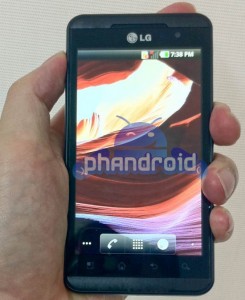 As some of you already know, LG is widely expected to unveil their first 3D smart phone at next month’s Mobile World Congress.  After promising that we’d step into a “new dimension” it didn’t take much to figure out what they were hinting at.  Add to that a listing for the phone on foreign website and you have unofficial confirmation.  Today we’ve learned what form factor the device will likely end up taking.

Borrowing heavily from their new Optimus Black and Optimus 2X aesthetics, this device appears to be a thin, black, and presumably light device.  According to a Phandroid source the screen is “definitely larger than 4 inches” which sounds essential when you’re dealing with 3D graphics.  Anything smaller and you’re cheating your user.  Other details are said to include a dual-core processor and front-facing camera.

We’re down to about two weeks before Mobile World Congress takes off so expect more details to trickle in shortly.  If there’s one thing we’ve learned over the last few years, it’s that Android phones have a hard time avoiding the spotlight.