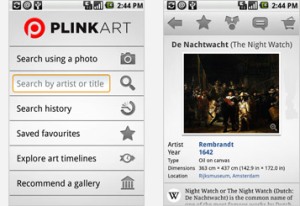 The following interview was conducted by “Royalness”, an occasional AndroidGuys guest writer.Â  We’d like to thank both him as well as Mark Cummins and James Philbin.Â  Further, we also want to congratulate the team on the recent prize for top application in Education & Reference!

Tell us a bit about Plink!
Plink was founded by myself and James Philbin. We were both doing PhDs in computer vision, working on image search (in fact, I just finished last week). We had developed these cool systems that let you search with a photo in the same way Google lets you search with text, and the technology seemed too good just to let it gather dust on a lab shelf somewhere. So we started Plink to commercialize it. Phones were the natural place to use the tech – the camera is built-in, and the keyboard can be a bit fiddly, so suddenly image search is really useful. I’d been doing simple demos on my phone for a few months, and then the ADC2 came along, so it seemed like the time was ripe to make a proper app.

What is the idea behind PlinkArt?
We were thinking of a nice app to build image search into, and decided to start with art. There wasn’t anything out there that did anything similar!

What can PlinkArt do?
So PlinkArt lets you just snap a photo of a painting, which is automatically recognised by the app, and you get back all the info about the painting. It’s pretty cool, we hope lots of people will try it. We tried hard to make sure the app isn’t just a one trick-pony.Â  There are some nice browsing features so that you can explore the history of art, see more works by the same artist, etc. Our ‘Random’ button is also very popular – it lets you discover new paintings in a lucky-dip kind of way. When you find something you like, you can share it, add comments, order a print, etc. The app is Android-only at the moment, so a nice one to show off to your iPhone-bearing friends!

How does the picture search work?
I could give you 400 pages of PhD theses on that, just from the PlinkArt team alone. There are probably half a ton of academic papers on the technology. Probably best to say it’s magic!Â  For people who want a little more detail, the actual recognition isn’t taking place on the phone. The app uploads the images to our cloud-based visual search infrastructure, where the real work is done.Â  Recognition involves big databases and some heavy number crunching, so we expect recognition to stay mainly in the cloud.Â  One interesting fact is that the actual image recognition is really quick. Most of the delay the user sees is for uploading the photo over the cell network. So as networks get faster, the user experience is just going to get better.

Does it work as well as Shazam?
Yeah, the image search is really robust. If the painting is in our database, then the user image can be blurry, upside down and half obscured by a potted plant, and most of the time we still recognise it correctly. The main reason that users sometimes don’t get matches is that our art database is still growing. We have about 50,000 paintings in the database at the moment, but there’s an awful lot of art in the world, so it’ll take some time before we cover everything.

How do you plan to monetize?
Well, the Android app will always be free. However, if you come across a painting you like, there is a “Buy” button in the app that lets you order a print. So we generate some revenue that way. We also have some plans to work with art galleries, and we think there could be some bigger commercial opportunities there. With the $100,000 from the ADC2, we now have some breathing space to find out what will fly. 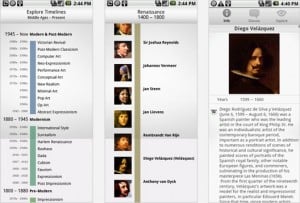 What are your other plans with PlinkArt?
We’ve just started talking to some major art galleries to pilot the app as a replacement for those clunky tape-recorder audio tours that are probably older than most of the exhibits in the museum. We’ll stream the audio guide content directly to your phone. We also have some ideas for treasure-hunt type games you could play in the gallery to make things more fun for kids.

What other features are in the pipeline?
One of the things that surprised us after we launched on the Android Market was the quality of the user feedback. We have a little feedback button in the app, and we’ve had a steady stream of really thoughtful emails from people with ideas for what we could add to the app. One feature that we’ve already announced is location-based recommendations. We’d like to take the user’s favourite paintings, and their location, and say “Hey, you should go here”. So if you’re in Paris, you’re probably going to go to the Louvre, but maybe you didn’t know that the MusÃ©e d’Orsay has got some really good stuff by your favourite artist. If PlinkArt could then guide you round the museum once you got there, that would just be an extra level of awesome.

Will you be making PlinkArt for other mobile platforms?
Well, like every app developer we’re hoping to eventually support all major platforms. But personally, I’m a bit of an Android fanboy.Â  Ultimately I think it will be the largest platform, though perhaps not for two or three years. But I think it’s a smart bet for developers to get their apps established now. My own personal phone is Android and I
love it. Now if only they would release the European version of the Droid…

Can other devs use the image recognition engine in their own apps?
Yes! And not just for art, but for anything they want. We’ll be rolling out our [Developer API] over the next month or two. It’ll provide a small library that will let anyone do image recognition with two lines of code. Better yet, entry level use of the API is free.

Anything you want to add?
We hope lots of readers will download PlinkArt from the market and tell us what they think!

If you’d like to grab a copy of PlinkArt for yourself, you can head to the market or scan the bardcode below.