Boy that didn’t take long. Coming right out of last week’s CES show, everybody was talking about how wonderful Palm’s new device, and OS is. There was an awful lot of pressure on the company to come out with something innovative as they risk heading the way of the dodo bird.

Not only did Palm stave off extinction a little bit longer, but they seem to have almost immediately risen back to a top contender.Â  Things are finally starting to look good for the company.Â  Nothing can stop this momentum, right?Â  Well, nothing except for a little friendly competition and spotlight stealing.

Telstra had some executives at the show who met with Palm to check out the Pre.Â  The execs came away saying that the newÂ  HTC phone that they’ve seen was “better and more functional”.Â  Backing up a second for those not familiar, Telstra is Australia’s largest telecommunications company so we’re pretty sure they’ve seen thing or two.

The executives went on to say that they “have seen both and we believe that the new HTC phone will be a real competitor to the iPhone and the Pre which at this stage looks nice but is still not delivered to market”.

The HTC handset is believed to arrive sometime in the second quarter of this year.Â  On top of Android being used for the platform, HTC is rumored to have written some Linux stuff for the device.Â  If it’s anything like their TouchFlo work they put on top of the Windows Mobile handsets, we’re all in.

Thanks to everyone who sent this in so quickly! 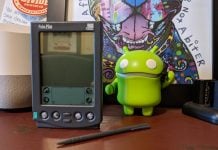