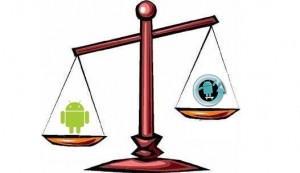 UPDATE: As pointed out in the comments, it might have been more appropriate to title this piece “Are Custom ROMs Overrated” instead.Â  We hope you will sting the piece enjoyable nonetheless.

I decided some time ago that I would root my phone after an app came in the market proclaiming that I could do the process with the click of a button.

Why root?Â  The advantages were obvious. The enhanced browser with multi touch, root access, one click GPS activation, and the list goes on. I installed the custom ROM without any problems and immediately I set about exploring my new Android. I had installed the stable Cyanogen 4.0.4 ROM and I played on my phone for hours exploring the new features. Honestly it was fantastic.

Over the next few weeks I started to follow the custom ROM community and became a bit more confident in flashing different ROMâ€™s. I tried Hero ROMs and loved the look of it.Â  It was then that I started to use the experimental Cyanogen ROMs.

But thatâ€™s when the problems started.

When using custom ROMs I think you have to accept that not everything is going to work the way it should and I started to run into problems that may have been trivial to some, but to me they were frustrating and getting in the way of using my G1 how I wanted.

There was an issue with syncing your Google calendar and no matter what I tried I couldnâ€™t get 2 way syncing. Trivial I know, but I had to re-flash my phone and I lost ALL my calendar entries on my phone because it wouldnâ€™t allow the online calendar to sync to the phone. There were a lot of entries so the thought of having to enter them all again and then remove the duplicate entries on my online calendar proved too much. Also, one of the most frustrating features was the fact that the solution to a lot of the problems was to â€œwipe the phone, reformat and repartition your SD card and re-flashâ€. The growing number of times I had to reinstall my apps was getting annoying. All my SMSes were backed up to email and obviously my email and contacts were all synced to my Google account so that wasnâ€™t so bad.Â  Taking advantage of saving the apps to SD helped getting all of the apps -reinstalled too, but it was agitating nonetheless.

This wasnâ€™t what made me move from custom ROMs. What did it was the fact that I became increasingly obsessed by when the next update would come. Features were promised in future updates and I wanted them….I wanted them now! I felt as if the ROM I was using that had miles more features than the official one, was getting out of date. Unbelievable. I was being spoiled and I wanted more. The small bugs were fixed quite quickly but some things took a while and I found myself using a phone that was always missing one thing or another – Things I felt I needed.

The Hero ROMs didnâ€™t have Bluetooth, I mean come on! I needed Bluetooth. The latest Cyanogen ROM (4.1.11.1) had an issue displaying Google maps and this affected apps I that was trying to review. I also realized that the majority of things that came with using a custom ROM were just bonuses and not necessities. I didnâ€™t need phone wide search so desperately and I didnâ€™t need the new market that showed me the same app 3 times due to some bug. So I weighed up the pros and cons and decided that I would go back to a stable, official ROM.

Some may say I copped out but honestly I just wanted a phone that worked without all the hassle. Yes I miss some features and I am trying to convince myself that I did the right thing, but I havenâ€™t had 1 force close and ALL my apps are working as they should.

When I decided to move back to an unrooted phone there was a cease and desist order served on Cyanogen. This was just coincidental timing and this had nothing to do with why I unrooted.Â  After my experience of using custom ROMs I have nothing but praise and admiration for custom ROM builders such as Cyanogen and Drizzy. They provide something that people want and maybe if Google utilised their skills then people wouldnâ€™t have to mess about getting the features they want. If some guy sitting at home can create a version of Android that people are asking for then what are the Android team at Google doing?

So is rooting your phone overrated? Yes I think it is. Itâ€™s not to say it doesnâ€™t have its advantages but if Rooting = Advantages + Lots of Hassle, then I am quite happy on my unrooted G1.

LeEco posts kernel sources for some of its smartphones and TVs