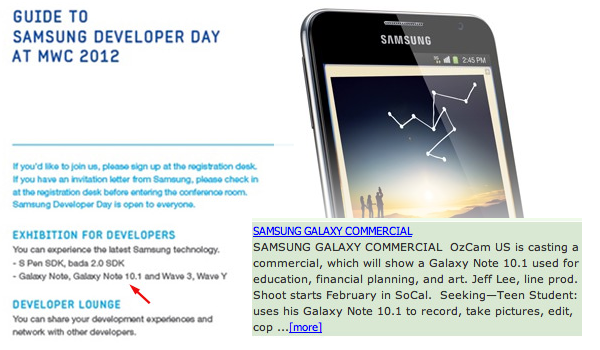 Is Samsung about to unveil a 10.1-inch version of their Galaxy Tab at Mobile World Congress?  Depending on how you read through the verbiage on the invitation, the answer is a most certain yes.

Hidden in plain sight among the details from this year’s Developer Day exhibit is a mention of a Galaxy Note 10.1, right next to the Galaxy Note.  While it could be an accidental oversight, it’s most likely not supposed to be the Galaxy Tab 10.1 after all.  Why?  Because the pen employed in the initial 5.3-inch model is based on Wacom technology was originally used on those standalone drawing pads for PCs.  Well, that’s only part of it.  The developer event is slated to center around the S-Pen SDK and it would be the perfect venue to debut a new device.  Besides, the Galaxy Tab 10.1 is soooo 2011 anyways.

The guys over at The Verge did a little bit of digging around and found that Samsung is shooting a commercial this month which features a Galaxy Note 10.1.  The casting sheet was looking for a “teen student” to “record, take pictures, and edit” stuff that falls under the umbrella of “education, financial planning, and art”. Now, this doesn’t sound like an accident to us.

The idea of a tablet with a stylus is certainly not new as HTC already does it with both the Flyer and the Jetstream.  It will definitely be weird to see how Samsung positions the Galaxy Note 10.1 as it certainly infringes on Galaxy Note and Tab 10.1 ground. I’d be surprised if Samsung doesn’t ultimately roll out a whole series of Note sizes, including a 7-inch and 8.9-inch model.