Lost amongst all the news surrounding the reveal of the name of Google’s next version of Android, Marshmallow, it seems that we may be close to a release of the next generation Moto 360. However, it may not just be one new Moto 360 in the works.

It seems that two different variants have passed through Brazil’s FCC and carry two separate model numbers. The 360S and the 360L are the two different models coming from Motorola, and while the documents don’t give us much information, there is a bit of info that can be found. 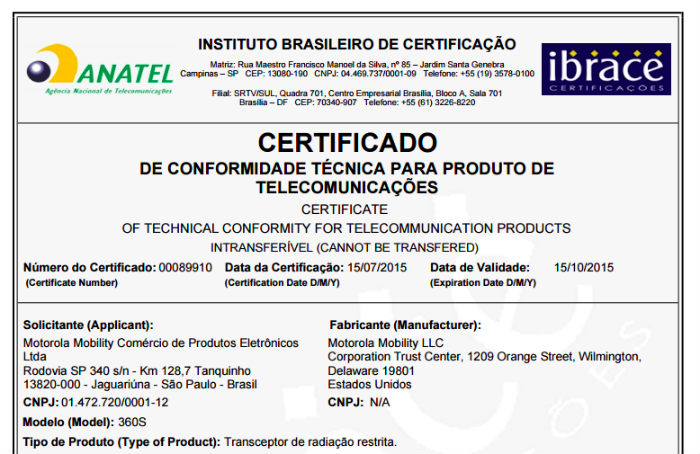 First, the radios that will be included, are found in the documents, as well as the battery capacity. The 360S will have a 270mAh battery, while the 360L will have a 375mAh battery. Both devices will have Bluetooth LE and WiFi b/g/n.

Although these devices passed through Brazil’s FCC, not much else can be said as to whether this is the real deal. According to 9to5Google, a similar document went through Brazil’s in regards to the original Moto 360, which obviously came to fruition.

Both the 360L and the 360S are registered through Motorola, so we can only hope that the accidentally tweeted video of what looked like a new Moto 360, are real. It’s been almost a full year since the Moto 360 hit the scene and folks are clamoring to see what Motorla has up their sleeve next. It will also be interesting to see what improvements are made to the Moto 360

, given all the different Android Wear smart watches that have hit the market since the 360 was released.

Is an updated Moto 360 (or 2) an insta-buy for you? Let us know what you would like to see from the next-gen Moto 360, including features and design.