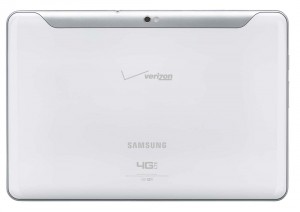 The BBQ master himself, Ray Walters, did a video review of Samsung’s newest flagship tablet, the Tab 10.1, back in June. Since then, Verizon has released a 4G LTE version of the device, and they were kind enough to send us one for review. I won’t get too much into the device itself, as there are only a few differences between the LTE and WiFi versions. Let’s get those out of the way first. The biggest difference that I noticed with the LTE Tab 10.1 is placement. The power button and volume rocker are placed on the top (the left when the device is held in landscape mode), instead of being on the right side, as they are with the WiFi Tab 10.1. This causes a few problems, mainly when watching videos. For example, I watched several YouTube videos, and accidentally pressed the power button when reaching for the volume rocker time after time.

It’s also worth noting the addition of the LTE SIM card slot on the top of the device, next to the 3.5mm headphone jack. You can see what that looks like in the photo above. The SIM card itself actually appears to be a MicroSIM, and is much smaller than a T-Mobile SIM card.

Personally, I’m not a fan of the charging port placement on the device. It’s in the same place on the device as on its WiFi brother, but it can be a nuisance. This is mostly prevalent when attempting to use the tablet in landscape.

It’s also worth noting that the Tab 10.1’s screen is a huge fingerprint magnet. Obviously, with Honeycomb’s built-in bar at the bottom of the screen, the need for hardware buttons is virtually eliminated. This translates into more finger presses, and thus more smears and fingerprints. If you plan to use a Tab 10.1 (or any Honeycomb tablet, for that matter), you might want to invest in a microfiber screen cleaning cloth. One thing that I can’t complain about is the fact that Big Red didn’t load the tablet down with bloatware, as they have done with previous devices. In fact, there weren’t any preloaded Verizon applications on the tablet out of the box. For that, I applaud them. Now, on to what you’ve been waiting for: LTE. Unfortunately, Verizon doesn’t have LTE coverage in the open country that is Alabama, so I took the Tab 10.1 to Chattanooga, Tennessee, where there is significant 4G LTE coverage. I ran six Speedtests, and one word came to mind when I looked at the results: “Wow”.

I’d heard that Verizon’s LTE speeds were fast, but I had no idea how fast. The raw amount of power that LTE holds is surprising, and this is noticeable when we look at the results. Speeds peaked at around 23MBps download, and 7MBps for uploads. I can vouch for these, as I visited several Flash-intensive sites at the same time in the browser, and within ten seconds they had all finished loading completely.

Naturally, in areas that don’t have LTE coverage, the device runs on Verizon’s 3G CDMA network, which is fast enough for daily use. Users can also enable global data roaming, for those trips overseas. The LTE Tab 10.1 ships with stock Android 3.1 (Honeycomb). We haven’t heard any news regarding the Verizon powerhouse receiving Samsung’s TouchWiz UX, but it’s nice to dream. With that, I’d like to shift this review over to our own Thijs Koot, who received a WiFi Galaxy Tab 10.1. His device came with TouchWiz UX preinstalled, and he’s going to give us a quick look at how it applies to tablets and Honeycomb. Take it away, Thijs. While some manufacturers added a little eye candy to Honeycomb, Samsung is the first to make a skin, although I see it more as a few additions and tweaks, filed under the name Touchwiz UX. The UI brings improved stability and performance, along with some extra apps and enhancements. Most of the additions Samsung made are handy, but there are a few things that have yet to prove their usefulness. 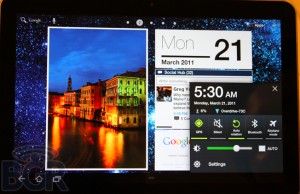 I’ll start with the most positive part of all: the Quick Panel. While Honeycomb offers a small range of options when you tap the clock in the system bar, Samsung has made it possible to control virtually anything in your tablet with one, two, or three taps, hence the name Quick Panel. This may not sound like a huge difference, but trust me, it is. Have you ever felt like quickly switching your GPS on or off, or adjusting the brightness? Look no further than the Quick Panel. On to the most obvious addition: mini apps. As you probably noticed, there’s a small arrow in the middle of the system bar that when swiped or tapped on, brings up a quick menu, from which you can choose from a predefined set of mini apps. Mini apps are essentially apps that can run on top of your current application, so that you don’t have to move to another one to make a little memo or notation. The six predefined – and uncustomizable, for that matter – mini apps are:

Samsung also brought a few of their own apps to the table. You’ll get the following bloatware with a TouchWiz Tab 10.1:

Other apps include a revamped camera, an eBook app, and a memo app. Sammy’s Social Hub, which unites all your social media feeds into one, also comes preinstalled on the device. Personally, I like to keep my Twitter away from my Facebook, and vice versa. Don’t even think about mixing my email with social media, either. Furthermore, the Hub itself is a bit ugly and could do with some more functionality.

Samsung also offers the ability to take screenshots by tapping a button in the system bar. It’s a cool feature, but it obviously doesn’t work for fullscreen apps. Where stock Honeycomb offers you a dark and beautiful look, Touchwiz makes makes Honeycomb more vivid. The dark shades have mostly been replaced, and the stock wallpapers have been traded for those that you might know from the Galaxy S devices. I personally prefer TouchWiz UX over the stock Honeycomb UI, and too people who don’t like stock Honeycomb or want something extra on their Tab, it’s the ideal choice. It offers extra functionality, but doesn’t drain the battery or slow down the device. But if you prefer stock Honeycomb, by all means stick to it.

Feel free to let us know what you think about TouchWiz UX, or Verizon’s LTE Tab 10.1 by leaving a comment below!