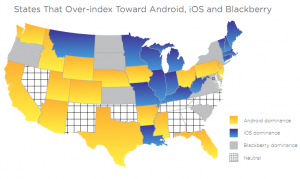 Jumptap, a key player in the mobile advertising industry, has released their latest Mobile STAT report which breaks down a number of metrics that we find interesting.  The study is based on the first half of the year (2011) and pulls data from more than 83 million unique users.

According to Jumptap, consumers in the South and Southwest really favor Android while iOS is the preferred smart phone platform in the Midwest and Northeast.  You can see from the nifty image above that there’s a solid, if almost political-like divide across the country. The data compiled for this report show Android accounting for 38 percent of the smart phone market share and Apple coming in closely with 33 percent.  These figures are somewhat similar to comScore’s latest MobiLens report for the second quarter.

Being the preferred platform for users is one thing, but being the best at providing click-through rates and performing better for advertisers is another thing altogether.  And it’s this area where Apple really excels.  With a .78 percent click-through rate, iOS is considerably higher than Android’s third place .47 percent.  Symbian, at .50 percent,  edged out Android for this report.  Jumptap attributes Apple’s success to a uniformity in app experience, something we know Android could do much better in.

The full Jumptap report is an insightful read and can be downloaded free of charge.  Should you check it out, you’ll see how specific carriers and handset makers do in terms of click-through rates.  Be sure to check it out if you’re one of those number crunching types.

So, does your state swing Android, iOS, or Blackberry?