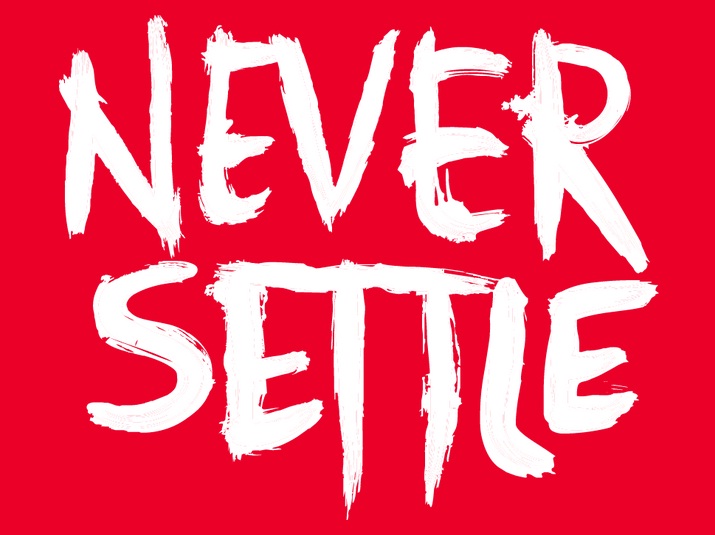 What you find below is a list of all the specifications that we know thus far and what is confirmed by the OnePlus itself. 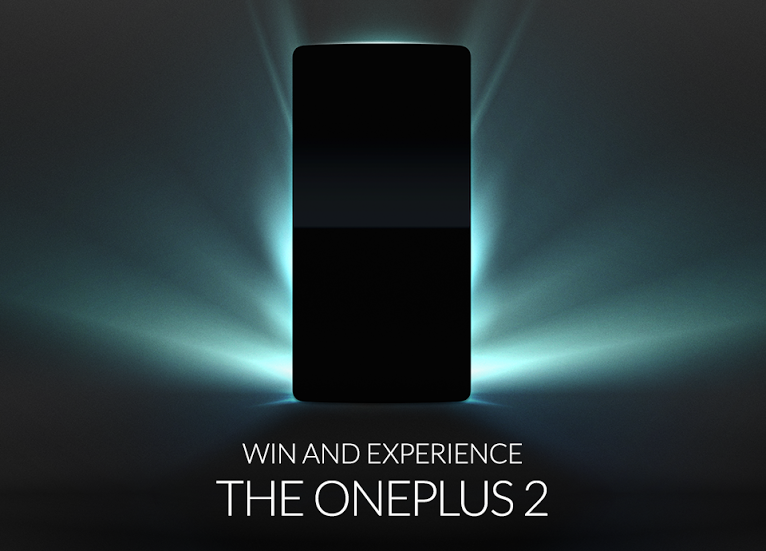 According to OnePlus, the smartphone will come loaded with Qualcomm’s latest and greatest Snapdragon 810 V2.1 processor. OnePlus did acknowledge the overheating issues with the original 810 processor and collaborated with Qualcomm to resolve said issues. The outcome of collaboration resulted in the Snapdragon 810 V2.1. The processor will be coupled with Adreno 430 GPU which will be sufficient enough to run the high-end games available in the market today.

[blockquote author=”Pete Lau, CEO OnePlus”]Although there have been reports that the 810 runs warmer than its predecessors, we assure you that we have taken all the necessary precautions and beyond to prevent this from occurring in the OnePlus 2. We worked very closely with Qualcomm’s engineers to integrate an improved version of the chipset (v2.1) in the OnePlus 2, and fine-tuned both hardware and software. [/blockquote]

For software, the OnePlus 2 will be running company’s own OxygenOS based on Android Lollipop and is optimized specifically for the Snapdragon 810 V2.1.

OnePlus has announced that the OnePlus 2 will be ship with a USB Type-C port for data syncing and charging. OnePlus 2 will be the first global smartphone sporting this breakthrough technology which is smaller and thinner than ever before. One of the sweetest features of the USB Type-C plug is that both ends are symmetrical and it can be inserted into your device in either direction.

OnePlus will be launching its next smartphone on July 27, but in a different way than usual. OnePlus wants to invite the whole world to its next smartphone launch. OnePlus will be unveiling the OnePlus 2 to the world completely in virtual reality (VR). Starting July 27 at 7:00pm PT, everyone around the world can stream the launch of the OnePlus 2.

A flagship phone deserves flagship features, and security shouldn’t have to be traded for convenience. OnePlus just announced that the OnePlus 2 will feature a fingerprint sensor, bringing security to the OnePlus 2 users.

According to OnePlus, the fingerprint scanner is “refined and quick” and will be faster than TouchID. You can store up to five fingerprint profiles and can customize these profiles for more personal touch. This is a great addition to any smartphone as native fingerprint support is coming in Android M. This means that apps can make use of fingerprint sensor instead of trying to remember passwords all the time.

Latest News on the OnePlus 2

The upcoming OnePlus 2 was just spotted in the Bluetooth SIG database. It appears that OnePlus 2 will be available in three different models – A2001, A2003 and A2005. All have been certified with hardware version 2.2 and software version 2.01 for Bluetooth 4.1 specification. One of these models, the A2001, was recently spotted in a leaked benchmark result carrying Snapdragon 810 chipset and a 3GB of RAM and is similar to what is officially confirmed by the company. 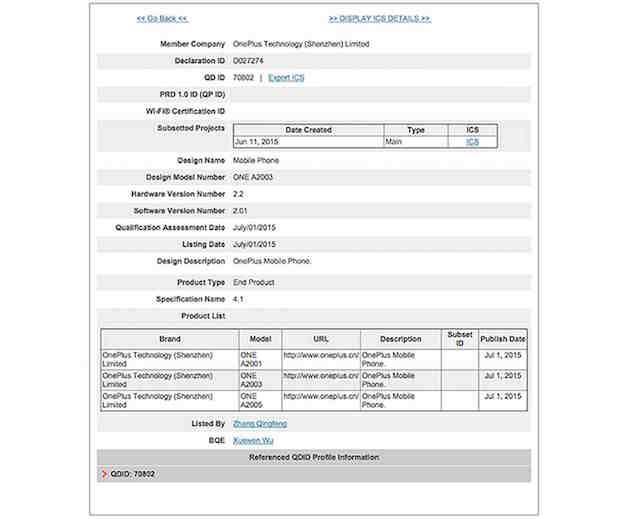 Unfortunately, the entries does not provide any hardware details about these three models and at the moment, it’s unclear how different these three OnePlus 2 models actually are. It could be that OnePlus is separating out three storage models into three separate models, or maybe we are looking at model numbers that are separated by different amount of RAM. But, these are only speculations on our part that may or may not come true.

Today, another model of OnePlus,  A2003, popped up on GFX benchmark site carrying Snapdragon 810 chipset clocked at just 1.55GHz along with 4GB of RAM. We could see the clock speed turned down to 1.55GHz from 2.0GHz, maybe this is done to reduce the heat generated by the chipset. 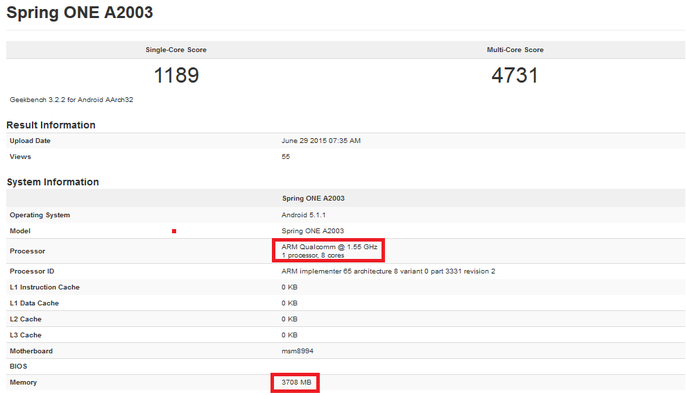 According to OnePlus CEO Pete Lau, the OnePlus 2 will cost less than $450. According to me, it was the price point that made OnePlus One a real “flagship killer”, but it seems like they’re trying to distance themselves from their legacy as a budget brand.

We've seen price estimates for the #OnePlus2 upwards of $500. "Honestly, it's never been about the price." pic.twitter.com/gFoAuVTlGX

OnePlus CEO Pete Lau just announced that the OnePlus 2 will come with 4GB of LPDDR4 RAM. With LPDDR4, you get twice the bandwidth performance as the LPDDR3 at the same power consumption profile. LPDDR4 RAM also consume less power as compared to the LPDDR3 RAM. And with speeds up to 32 GB/s, it is also twice as fast as the LPDDR3. It offers optimal support for power-saving low frequency mode that brings clock speeds down when performing those everyday and necessary tasks.

[blockquote author=”Pete Lau, CEO OnePlus”] LPDDR4 on the OnePlus 2 allows an even better user experience when using features such as slow-motion video, face recognition, and low-latency gaming–features that typically use a lot of bandwidth and can cause heavy lagging. Not only will the experience on the OnePlus 2 be smoother and sleeker, but your battery life will benefit as well.[/blockquote]

OnePlus team member on Friday confirmed that OnePlus 2 will have a whooping 3300 mAh battery (up from 3,100 mAh of the OnePlus One),while the physical size of the phone will actually be smaller than that of its predecessor.

Regarding the LTE Band Support, OnePlus pointed out that there will be two global models of OnePlus 2 supporting different LTE bands.

OnePlus also made a similar statement to what they made last year. OnePlus is now asking fans about what kind of optional StyleSwap covers they’d want to see available alongside its upcoming smartphone. They already have quite few in works and are open for suggestions. The OnePlus forum is hosting a poll which allows register user to vote for StyleSwap materials including Ceramic, Rosewood, Mother-of-pearl, Bamboo, Quartz, Leather, Nylon and Denim. These are quite a few interesting choices but we will see how OnePlus escalates them. 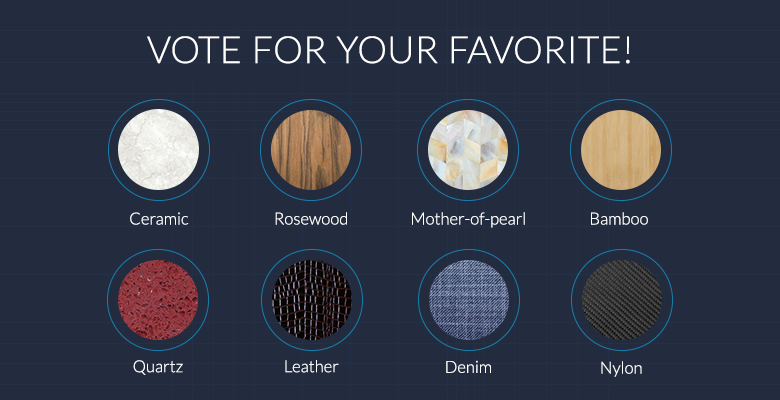